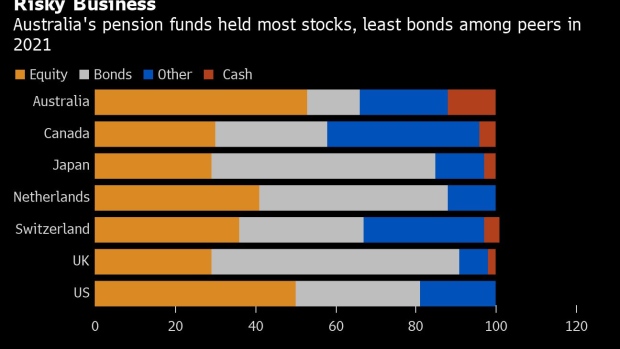 A pedestrian outside the Reserve Bank of Australia (RBA) building in Sydney, Australia, on Monday, May 2, 2022. Australian bonds sold off as investors anticipate the nation’s central bank will raise interest rates on Tuesday for the first time since 2010. , Bloomberg

(Bloomberg) -- After years of eschewing the world’s safest assets, the managers of Australia’s $2.4 trillion of retirements savings are buying sovereign bonds.

The trigger: fear that the global economy is sliding into recession.

It’s a watershed moment for the country’s pension chiefs, whose love affair with riskier assets saw them binge on stocks while skirting this year’s historic bond rout.

They expect the months ahead to be among the most challenging of their careers, as they shift from strategies that supercharged returns to an investment mix that can withstand a downturn as central banks do whatever it takes to quell inflation.

The shift will reverberate through the funds industry -- as coveted mandates changes hands -- and across global markets as more money flows into bonds that have rebounded since June.

Dean’s view on the economic outlook stands in contrast to those investors who continue to bid up stocks and junk bonds on hopes of a soft landing.

Interviews with her and another five of the nation’s top pensions suggest their pivot to sovereign debt is about to accelerate.

AustralianSuper has nearly doubled its debt holdings to 12.5% in the past few months as it sold stocks to de-risk the portfolio. The A$70 billion Construction & Building Unions Superannuation Fund, known as Cbus Super, said bonds now represent “reasonable value.” The Australian Retirement Trust -- the country’s second-biggest fund -- is also adding to bond holdings after prices became more attractive.

“After being poor value for as long as any of us can remember, all of a sudden they’ve come back into the viewfinder,” Justin Arter, chief executive of Cbus Super, said of bonds.

Damian Graham, chief investment officer of the A$155 billion Aware Super fund, has shifted from “modestly underweight” in fixed-income, a position it took earlier when yields had catapulted higher.

“That trade has progressed,” said Graham. “We’re no longer underweight fixed interest in the way we were.”

At the heart of the change is their view that markets are in for at least a year of turbulence as central banks from Sydney to Washington fight the sharpest spike in consumer prices in a generation.

Federal Reserve Chairman Jerome Powell declared the campaign against inflation as “unconditional” while Governor Philip Lowe said the Reserve Bank of Australia would do what’s necessary to drag price gains down to its 2-3% target. The Bank of Canada put investors on notice with a jumbo-sized hike last month that caught markets by surprise.

The firefighting is coming at a price. The 2-and-10 year part of the Treasury bond curve -- a gauge often seen as a harbinger of recession -- has inverted to levels last seen when Paul Volcker steamrolled the US economy in the 1980s to tame runaway inflation. Closer to home, the gap between short-and long-end New Zealand rates has also inverted while the difference between Australia’s 3-and-10 year bond futures curve is headed in the same direction.

“It’s probably one of the more complex environments we’ve been in,” said Anna Shelley, chief investment officer at AMP Ltd.’s wealth management arm. “It’s the potential depth of the recession that’s a concern. At this point our view is that it will be a shallow-ish recession but if negative indicators start to increase, we may see a deeper recession.”

To be sure, Australia’s pension funds are not moving to a traditional 60/40 portfolio split of stocks and bonds. Their rates holdings are likely to stay well short of this formula, and they still have significant stakes in a swath of alternative assets.

60/40 to Power Through to Beat Inflation Eventually: MLIV Pulse

And downturns aren’t viewed as being all bad. Some investors point to their importance in making space for new growth by shedding deadwood.

UniSuper Management Pty., which counts the nation’s top academics among its members, ramped up cash holdings to historical highs as a buffer against recession risks and the prospect of a re-set on asset prices.

“The good news is that the fear of recession is probably going to be worse than the recession itself,” said John Pearce, the A$110 billion pension’s chief investment officer. “Recessions are cleansing mechanisms, and if you look through history, recessions happened a lot.”

The sentiment is shared by Ian Patrick, the investment chief of Australian Retirement Trust.

“A recession probably clears people’s fear or fog to the point that they can look through that part of the cycle and identify when growth may re-emerge,” he said. “The threat of recession probably is tougher to navigate than the recession itself. It’s very hard as an allocator to get a clear picture on where value is.”

That puts him on the same course as his peers right now.

Bonds are “certainly more attractive than they were 12 or 18 months ago,” he said. “There’s no two ways about that.”