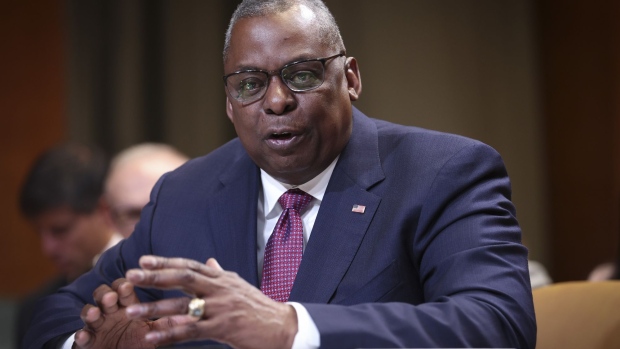 (Bloomberg) -- Defense Secretary Lloyd Austin said China has noted the international response to Russia’s invasion of Ukraine and could take steps to protect itself from a similar rebuke stemming from a more aggressive posture toward Taiwan.

“You have to believe that they’re thinking along those lines, if they were considering doing something in the future,” Austin told reporters Wednesday shortly after he left Cambodia, where he attended a series of meetings with ASEAN defense chiefs.

He said he hadn’t “seen any physical signs of them insulating themselves.”

Asked if he anticipated Pacific Rim nations would rally to Taiwan’s side in the event of an invasion, Austin said allies’ respect for the rules-based international order “will lead them in whatever direction they go in, and not just allegiance to the United States.”

President Joe Biden has said the US would defend Taiwan militarily from a Chinese attack -- remarks that prompted Beijing to increase pressure on the self-governing island following an August visit by House Speaker Nancy Pelosi.

Still, China remains a “challenge” for the US and is likely already working to safeguard its economy and supply chains against potential future sanctions allies would impose if it tries to invade Taiwan.

Austin met with his Chinese counterpart, Defense Minister Wei Fenghe, on Tuesday in Siem Reap, Cambodia, the first face-to-face meeting between the two since Pelosi’s visit to Taipei.

The Pentagon chief called for the two sides to keep their lines of communication open and warned of “increasingly dangerous behavior” by Chinese military aircraft in the Indo-Pacific region, according to a statement and briefing by US officials after the meeting ended.

Earlier: US Presses China to Ease Up on Taiwan as Defense Chiefs Meet

US military forces are “spending a lot more time” training in Asia, for military exercises such as Garuda Shield, Austin said Wednesday. “Our troops want to train with allies and partners. They want to develop interoperability,” he said.

Austin described his meetings with China, India, the Philippines and other nations on the sidelines of the ASEAN gathering as “very productive.”

“This is a big area, a vast area and it supports a lot of commerce,” he said. We want to make sure that the skies and seas remain open and accessible to everybody in the region and around the globe.”