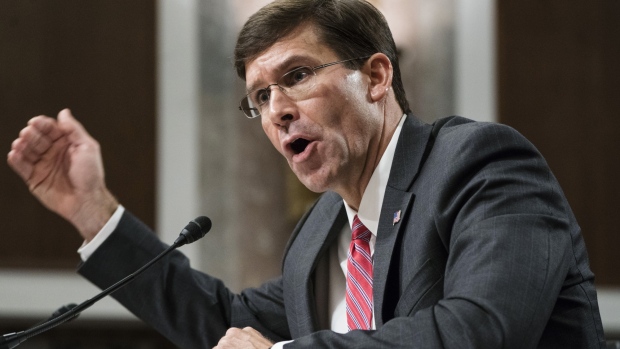 Mark Esper, secretary of defense nominee for U.S. President Donald Trump, testifies during a Senate Armed Services Committee confirmation hearing on Capitol Hill in Washington, D.C., U.S., on Tuesday, July 16, 2019. Esper's confirmation as secretary of defense is a matter of urgency after almost seven months with an acting leader at the Pentagon, the top Republican and Democrat on the Senate Armed Services Committee said at the hearing. , Bloomberg

(Bloomberg) -- U.S. Secretary of Defense Mark Esper warned that NATO allies utilizing 5G telecommunications networks developed by China could put military and intelligence relationships at risk and were essentially giving Beijing some control over their own communications systems.

“Every Chinese company has the potential to be an accomplice in Beijing’s state-sponsored campaign to steal technology,” Esper said in a speech Thursday in Maryland. He was speaking at a conference hosted by the Department of Homeland Security’s Cybersecurity and Infrastructure Security Agency. “Nations that partner with Chinese firms put the security of their networks at risk.”

The Pentagon chief’s warning comes amid an intensive campaign by the Trump administration to keep products created by Chinese telecommunication companies, including Huawei Technologies Co., out of future 5G broadband networks. This has included threats by Secretary of State Michael Pompeo to curb intelligence-sharing with allies if they don’t comply.

Esper said that he traveled to Europe two weeks ago and delivered a message to NATO allies about the security risks posed by 5G networks built with Chinese components. Beyond the military and intelligence risks of Chinese 5G, Esper said partnering with those companies could compromise “commercial institutions such as banks and hospitals and media outlets.”

Huawei executives have rejected U.S. arguments that their systems could be used for spying.

“Just like the other warfighting domains, our cyber capabilities are enhanced by a strong network of allies and partners,” said Esper. “Our ability to share information and operate on common communications networks serves as a force multiplier but it also comes with increased risk. To guard against this, we must help our allies develop their own cyber resiliency.”

To contact the editors responsible for this story: Alex Wayne at awayne3@bloomberg.net, Bill Faries, Larry Liebert