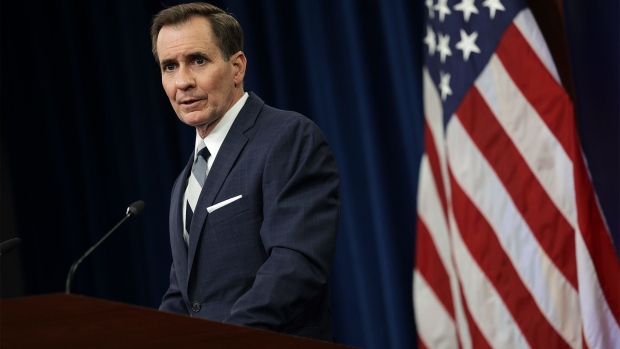 ARLINGTON, VIRGINIA - APRIL 19: Pentagon Press Secretary John Kirby holds a news briefing at the Pentagon on April 19, 2022 in Arlington, Virginia. Kirby updated the media on the Russian invasion of Ukraine and spoke about the recent shipments of American weapons and supplies to the Ukrainians. (Photo by Kevin Dietsch/Getty Images) , Photographer: Kevin Dietsch/Getty Images

(Bloomberg) -- Pentagon Press Secretary John Kirby will move to the White House to take a senior communications role with a foreign policy focus.

The decision to shift Kirby to the White House comes after the departure last week of Press Secretary Jen Psaki, who was replaced by her deputy, Karine Jean-Pierre. Unlike Psaki - who served as the State Department spokeswoman in President Barack Obama’s administration - Jean-Pierre doesn’t have a foreign policy background as Russia’s invasion of Ukraine continues to dominate headlines and press briefings.

Kirby’s title, according to the statement, will be National Security Council coordinator for strategic communications.

The retired Navy rear admiral has seen his profile rise since Russia’s invasion of Ukraine, giving almost-daily briefings at the Pentagon, and during last year’s tumultuous US withdrawal from Afghanistan. In the Obama administration, he served as Pentagon and State Department spokesman, and has also been a foreign policy analyst for CNN.

Kirby’s successor behind the podium at the Pentagon hasn’t been determined, according to a Defense Department official. But his deputy J. Todd Breasseale -- a former spokesman for the Department of Homeland Security, Microsoft Corp. and Facebook Inc. -- is one likely candidate and is expected to take over the role at least temporarily.

Kirby’s move comes shortly after the departure of Emily Horne, the top spokeswoman for the National Security Council. Horne left her position on March 25 and was replaced by Adrienne Watson, the former communications director for the Democratic National Committee.