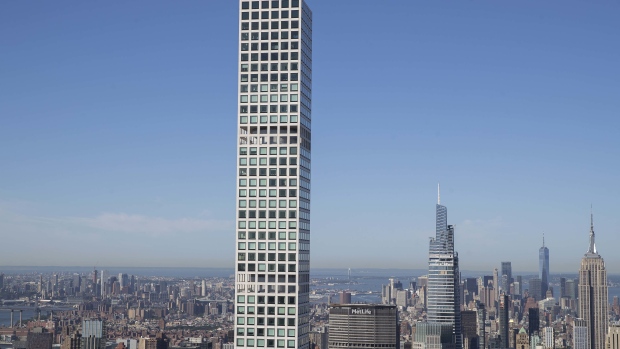 The owner of the 96th-floor penthouse atop Manhattan’s 432 Park Ave. is seeking a hefty return on the investment, by listing it for sale at US$169 million -- almost double the original purchase price.

The six-bedroom, seven-bath unit overlooking Central Park was purchased for US$87.7 million in 2016. Now, the 8,255-square-foot (767-square-meter) apartment is being offered along with all its furniture and artwork, according to StreetEasy.

The listing, by broker Ryan Serhant, calls the penthouse “a trophy unlike any other in the world,” with a private elevator landing, herringbone white oak floors and designer furniture from Fendi, Bentley and Hermes.

Manhattan’s luxury condo market is surging back after the doldrums of the pandemic, thanks largely to seller discounts that are helping to chip away at a pileup of empty units from the post-financial crisis construction boom.

The listing at 432 Park, one of the products of that boom, is “an effort to quantify the optimism that we’re seeing now that we haven’t seen in a long time,” said Jonathan Miller, president of appraisal firm Miller Samuel Inc. Even so, the pricing is “clearly aggressive.”

The 1,397-foot (426-meter) skyscraper at 57th Street and Park Avenue -- with amenities including climate-controlled wine cellars, a library, private restaurant and screening room -- was once the tallest residential tower in the Western Hemisphere. The building has historically offered discounts to its sky-high prices: Buyers who completed purchases in 2016 got reductions averaging 10 per cent, according to an analysis by Miller Samuel.

Now, the seller of the penthouse is “under the assumption that the market has doubled since September of 2016,” Miller said. “The list price assumption seems inconsistent with market trends.”

Serhant, head of a brokerage that bears his name, didn’t immediately return calls and emails seeking comment about the listing.