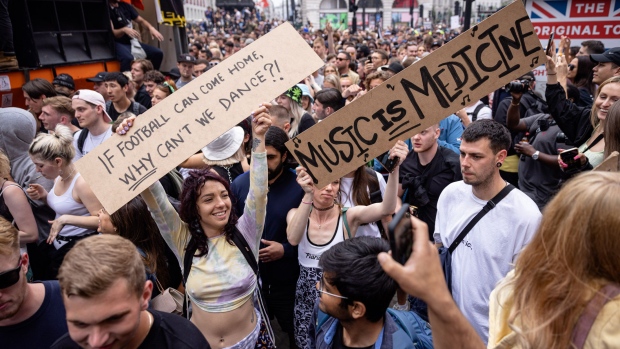 (Bloomberg) -- “IDs please!” A quick scan up and down, and a brief peruse through a purse. There are no instructions to remain six feet apart. Nor is anyone wearing a mask, servers aside. E11ven is at capacity. It’s Saturday night, the bottles are popping, there is flirting, there is laughter, and of course, there is dancing. As ripples of the pandemic continue to reverberate worldwide, it’s business as usual in Florida.

“No one cares, it’s like pre-Covid. Everyone is just enjoying life,” says Stephanie Lane, a 26-year-old marketer. Like many others, she escaped the lockdowns of the initial outbreak in New York to take up temporary residency in the Florida heat, where a sense of “normalcy” remained throughout—shades of 2019, not the past 16 months.

Miami, particularly South Beach, thrived. Diners scrambled for reservations at the new Carbone, as the Major Food Group powerhouse expanded its stable in January. A fresh playground emerged in April at the Goodtime Hotel, established by musician Pharrell Williams and nightlife entrepreneur David Grutman, with designs by Ken Fulk.

With restrictions eased in the U.S. and Europe, there is renewed optimism for the nightlife industry. In other parts of the world, however, the road map remains unclear. Further delays triggered by a spike in infections have put much of summer on hold in the U.K. Here are three case studies on how nightlife is keeping pace.

New York’s leisure pursuits have gone from nothing to full steam in what seemed like a blink, especially as the sun sets on the hybrid “work from anywhere” jamboree and many workers return to the five boroughs. For those who stayed the duration, the optimism of a year ago—when the city’s first wave waned, only to spike back—has morphed into an effusive joy, with infections down to 0.41% in June—the lowest positive test rate in the U.S.

The city subway is back to 24-hour service. Mask requirements are fewer and farther between. And with curfews gone and capacity restrictions lifted, the only bar to a good time now is vaccination status. Concert and nightclub venues are increasingly requiring proof of a jab, be it the physical card or the Excelsior Pass, New York State’s digital vaccine passport, to enter. With 70% of the state’s adult population having received at least one dose of a coronavirus vaccine—the threshold for herd immunity—New York state’s remaining pandemic mandates have been lifted, and the energy in the city is palpable to the point of intensity for those venturing out.

The timing is great for James Gardner, founder and owner of Grupo Gitano, whose scenester cocktail bar and restaurant, Garden of Love, returns for its fourth summer season on the border between Manhattan’s SoHo and Tribeca.

“We used our downtime to think about ways to innovate and automate. Last summer we reengineered the customer experience, knowing that we would be very high-profile when we reopened,” Gardner says. The company’s Tulum, Mexico, flagship operated through the winter, allowing it to further fine-tune the outdoor experience; in Manhattan, this features hundreds of 30-foot palm trees and lush plants in 24,000 square feet. (There’s also a mean ginger-mint lemonade.) As with many restaurants, no-contact automated ordering and payment via cell phones are now standard, as well as health screenings for team members and contact tracing for guests.

“Whatever the new normal, we probably won’t look that much different, eventually,” says Gardner. “We’re excited to witness and be a part of NYC getting back to what it was.”Staffing, though, remains a nationwide issue throughout the hospitality industry, especially in New York.

“Many [industry professionals] relocated upstate and elsewhere after losing jobs,” says Stephane Vacher, executive vice president of culture and entertainment at Standard International, which has two hotels in the city. “Some may not be in a rush to get back to work while they’ve had [financial unemployment] support, and it’s creating a vacuum in finding people to work in our industry.”“We can reopen, but people are not going to drop everything and run back—it’s been a year and a half,” he adds.

The Standard’s Meatpacking District venues, Le Bain and the Rooftop, will reopen officially in July, with the Top of the Standard (Boom Boom Room) to follow in September. The Standard piloted a few private parties over the last few months for vaccinated persons, including Pride celebrations in the past weekend, with around-the-block lines to get inside.

“People are ready to dance again, but we need to understand how we can make people happy and comfortable,” Stephane says. In more of a lounge environment, “we decided not to do a dramatic switch back to normal because we didn't think that the city was ready for it. We want to give everyone a chance to readjust organically.”

The same story is playing out on the West Coast. “I’m more worried about how this affected and is still affecting our staff,” says John Terzian, co-founder of H.wood Group in Los Angeles, than he is about financial loss to his business. “From hostess, cooks, delivery, back office, it was crushing. Day by day, we are coming out of this together.”

Known for its diversified portfolio of nightlife and restaurant venues—Bootsy Bellows, Poppy, and rooftop lounge Harriet’s at 1 Hotel West Hollywood—H.wood weathered the pandemic by designing seven different forms of delivery-takeout ghost kitchens, leveraging its marketing division to help separate and boost the concepts. Now, the nightclubs have reopened, and guests such as Drake, Mick Jagger, Jay-Z, Beyoncé, and the Kardashians can make their return.

On the other side of the Atlantic, the nightlife industry remains in limbo. U.K. Prime Minister Boris Johnson’s widely publicized “Freedom Day” of June 21 was postponed to July 19, following spikes of the delta variant. “This is a hugely devastating blow for the very industries that have been hardest hit by this pandemic,” said Michael Kill, chief executive officer of the Night Time Industries Association in a statement. “In a very real sense, the Prime Minister has ‘switched the lights off’ for an entire sector.” With hundreds of thousands of jobs lost, many of the workforce have left the industry.“The government must understand the human impact of this decision, not only considering the public health challenges of the virus but also the people within our sector who are suffering terribly and the real health risks that this represents,” Kill added.An inquiry in February by the All-Party Parliamentary Group for the Night-Time Economy (APPG), which includes more than 40 members of Parliament, found that 37% of the workforce in the industry had been made redundant, on average, with 85% of nightlife workers considering leaving the sector altogether. Nightlife businesses that had traded at 28% of their pre-Covid turnover from July to December 2020 have dropped further, to 10% today.

Speaking to the APPG, Danny Whitehead, a freelance DJ said: “It still pains me that this government hasn't found a solution to help many of those who work in the nightlife industry that contributes £66 billion [$93.5 billion] to our economy. We were the first sector to close and the last to open up, yet the government have left many of us, especially the self-employed, in the dark.”

Tape, in the heart of London’s West End, adapted itself to become a lounge last summer, and abided by the “rule of six,”with seated drinking and no dancing. “This was very difficult for us, as the true club vibe could not be achieved; hence revenues were greatly under par, and we struggled to break even on all the nights during that period,” says Heff Moraes, Tape senior partner.

“The nightlife sector has not been treated fairly and are worse hit, even within the hospitality and leisure industry,” despite being placed in the same category as gyms, pubs, and other hospitality businesses,” he explains. “The [value-added tax] reduction does not include alcohol sales, which contribute almost 100% of a nightclub’s revenue stream.”

With so much uncertainty and inconsistency, change has been the only constant for Tape. The venue closed its doors by September 2020 for a second time and invested more than £1 million to evolve from nightclub to lounge and then to evening theater. A brief reopening in December was cut short after infections rose again, leading the doors to close anew until May. To keep revenue streams flowing, Tape expanded into a hybrid record label, opening the venue up to podcasters and music video production companies.“Our traditional clubbers now come in earlier to experience great entertainment in a relaxed lounge setting, and listen to great live performance into the early evening to the early hours of the morning,” Moraes says.

The road to reopening will be set on July 12 by the government. On the bright side, mass gatherings have taken place in recent weeks at the Euros and at Wimbledon, with the British Grand Prix still to come.

Live Base, a production outfit synonymous with global club and celebrity culture, also took the pandemic as a time to recharge and refocus. Before 2020, it produced up to 200 events annually, with a roster that included Drake, Bruno Mars, DJ Snake, and Virgil Abloh, as well as collaborations with brands from Tommy Hilfiger to Cartier.

As the first wave was hitting the U.K. in February 2020, founder Amer Nawaz swiftly terminated his Hertfordshire office lease and kept an ear to the ground for opportunity. Dubai subsequently emerged as a haven for revelers, with in-bound flights available from August 2020 provided they had valid health insurance and negative PCR test results. Partnering with premium streetwear brand Amongst Few, Live Base relocated and established a recording studio in Dubai in January.

“We’ve connected cultures for several years between the USA, Europe, Asia, and Australia,” Nawaz says. “Now, we want to shine a light on the Middle East and showcase what’s happening here, musically and culturally.”

He’s confident that clubs and festivals will return globally: “Musicians have missed connecting with their fans, and the feeling of performing to a live crowd. When they reunite, it will be a beautiful moment. There are opportunities for everyone to grow organically during and after this.”

Beyond booking talent, Live Base shifted into brand consultancy, working with 20ten Creative and luxury bling merchant A Jewellers, as well as Formula 1’s McLaren and Logitech as part of an e-racing venture featuring Lando Norris and Harlem rapper A$AP Ferg, who is itching to get back into the club.

“We lost a whole year and many lives to this pandemic. I will be in the moment a little bit more, because it can all be gone in a moment,” A$AP says. During the downtime, he says he meditated and took up painting and designing and established a record label while executive-producing multiple films. “I found a gratitude for life beyond what I could have before,” he says.

When it returns, it will be a boom, he predicts. “There’ll be more people than ever before, more ballers, 9-5 workers, celebrities, and athletes all coming out,” he says.

Fellow entertainer Martin Alexander Pattara, who uses the stage name DJ Martin 2 Smoove, echoes the sentiment. Prior to the pandemic, he averaged about 100 flights a year, but the forced downtime allowed reflection, reconnecting with family and himself, getting fit, and learning new skills. He’s diversified beyond Instagram sessions and Zoom parties—which provided stopgap support for nightlife players worldwide—and leveraged relationships into a baseball cap line, with Gumball 3000.

“Had this happened at the start of my career, I would’ve been forced to do something else,” he says.“I’m forever an optimist and always look forward rather than back. I genuinely believe the nightlife days of the past were good. They’re great now, and whatever is next is going to be the best.”