It took a global pandemic and stocks falling 29 per cent from their record, but traders are quitting the world’s largest exchange-traded fund. For a day, anyway.

The US$233 billion SPDR S&P 500 ETF Trust saw investors withdraw more than US$6.5 billion in the latest session -- the most since October 2018, according to data compiled by Bloomberg. That’s after six straight days of inflows totaling about US$16.8 billion, during the worst rout on Wall Street since 1987. A chunk of that money may have been shorts borrowing shares to sell them.

With businesses shuttering and borders locking up, the virus has put the world on a virtual standstill. And a rapid decline in forecasts for the global economy and corporate earnings has broken the bull market for stocks and ushered in a bout of volatility not seen since the Great Depression. The S&P 500 has moved an average 7.7 per cent in the past seven sessions, and on Monday, the index saw its worst day in three decades. 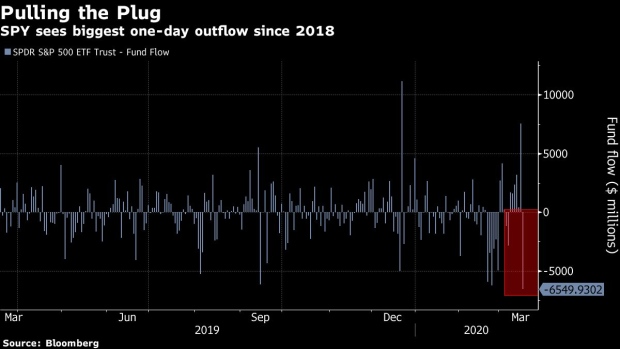 “We have seen signs of capitulation for sure,” said Michael Reynolds, investment strategy officer Glenmede Trust Company. “When we’re seeing outflows to come of those ETFs, it feels like full capitulation, like investors are giving up.”

Bond funds are in the same boat. The US$70.6 billion iShares Core U.S. Aggregate Bond ETF has posted eight straight days of withdrawals, the worst streak since the fund’s inception in 2003. Investors yanked a record US$4.5 billion in that span.

“People are raising money where they can,” said Matt Maley, equity strategist at Miller Tabak & Co. “They’re saying, ‘I don’t care what I have, I want to get out.’”

One of the sole areas benefiting from the high volatility are ultra-short Treasury funds, known for cash-parking -- which have taken in almost US$6 billion so far in March, already on pace for their best month ever, Bloomberg data show.

Economists at Deutsche Bank Securities now predict a severe global recession in the first half of the year.

“These are truly unprecedented events with no adequate historical example,” a group led by Peter Hooper wrote in a note Wednesday.

Following are SPY’s biggest holdings as of March 17: