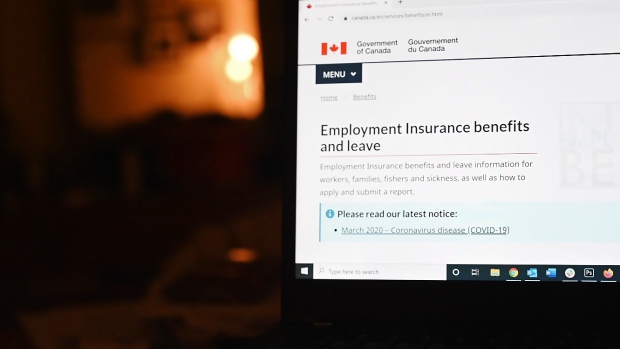 The federal government is looking to put into law new punishments, including jail time and fines, for Canadians who are found to be defrauding the Canada Emergency Response Benefit (CERB) program, according to a copy of a draft piece of legislation that has not been tabled in the House of Commons. , THE CANADIAN PRESS/Jesse Johnston

Many Canadians are just trying to get through the week, never mind the year, when it comes to their finances.

But accountants say it's already time to start taking stock of government support and wages received since the COVID-19 pandemic struck.

Launched in March, the Canada Emergency Response Benefit provides workers who lost their jobs or most of their hours with $500 per week. Most employers deduct taxes from the paycheque before mailing it out, but that's not the case with the CERB.

"My first piece of advice is people should be aware these are taxable benefits," said Fred O'Riordan, national tax policy leader at Ernst & Young. "Ultimately they are going to be responsible for having received them and for declaring them."

That means Ottawa and the provinces will claw back some of the $61.3 billion in CERB paid to 8.4 million Canadians as of July 19.

It also means recipients who took in the full amount available from the CERB -- $12,000, at $500 per week between March 15 and Oct. 3 for up to 12 weeks -- could owe taxes to the Canada Revenue Agency if they had even a small amount of other paid work this year.

Anyone who qualifies for the CERB but earns less than the "basic personal amount," which Ottawa is raising to $13,229 from $12,069 for 2020 -- does not have to pay tax, including on their CERB instalments.

"Obviously if you're in receipt of this money, you're in some financial pain already. And it's not easy to save up money to make sure that if there's tax owing when you file next that you're in a position to pay it," said O'Riordan.

He emphasized the need to start planning now, particularly as the provinces plan to retrieve their cut as well.

Canadians out of a job due to the pandemic and who made less than $1,000 per month at any point since mid-March qualify for a CERB payment (provided they made at least $5,000 last year), but if earnings crossed that monthly threshold without their realizing or declaring it, they may have received CERB monies they were not eligible for.

"There really weren't many controls at the front of this. Generally, people who have applied have received it.," O'Riordan said.

"Some people will be tempted if they've received money that they don't qualify for to sort of play the lottery game. But I would never recommend that, because it's pretty simple for the agency, through its algorithms, to determine whether people are eligible or not."

O'Riordan suggested informing the CRA of any extra payments before Dec. 31.

For those concerned about not being able to pay their taxes, experts recommend contacting the CRA to work out a payment plan.

"You might be in a lower tax bracket now ... so it's important to do those estimates to know how much you need to set aside," said Joseph Micallef, a tax partner at KPMG based in Toronto.

On the other hand, Canadians who have lost out on expected income for part of the year may be eligible for child credits or GST/HST credits they would not have qualified for previously.

Another option is to plan for a deduction based on RRSP contributions, but the deferred tax would likely not amount to much, said Montreal-based tax specialist Omar Yassine.

"In my opinion, if a taxpayer has seen their income decrease significantly due to COVID-19 they should not use part of the unused RRSP contributions for 2020."

Small business owners who have permanently closed shop still have tax obligations and must file in April for 2020-21, Yassine noted. But operational losses can be applied against taxable income for the past three years, which could result in a tax refund.

Business owners who have filed for bankruptcy should consult accountants or tax specialists, he said.