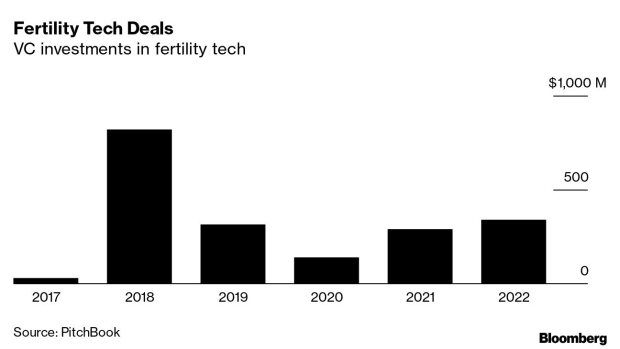 (Bloomberg) -- Victoria Borges and her husband Caio only found out they were carriers of cystic fibrosis after their first son Lucas was diagnosed with the disease at three weeks old. So when the Atlanta-based couple decided to have another child a few years later, they hoped to use in-vitro fertilization to avoid passing on the genetic condition.

But at around $40,000-- and not covered by insurance-- the cost was far too high for them to be paid out of pocket. The Borges borrowed most of the funds from Future Family, a buy-now-pay-later startup that provides financing for fertility services. They are paying back the loan in 60 monthly installments at a fixed interest rate of 7.99%.

“We started the process in November and it wasn’t until May that we had a plan to pay for it,” Victoria, 36, said. “We are not wealthy by any means, so it’s been a huge stressor.”

Future Family is part of a crop of startups in the US and Europe – a list that includes Gaia Family, Sunfish and Carrot Fertility – that aim to make fertility treatments more affordable by providing access to credit or working with employers to include these services as health benefits.

The way these companies make money varies based on their model, including charging borrowers interest, taking a portion of what gets paid to the treatment provider, or charging fees to employers.

This budding area of fintech has garnered more attention from venture investors, and forms part of the broader fertility technology sector, which has attracted $1.9 billion in funding from VCs since 2017, according to data provider Pitchbook.

“We were quite intrigued by all of the different socioeconomic shifts that were happening in the world, and were noticing particularly people having children later in life, and women having more economic power,” said Sasha Astafyeva, a partner at London-based tech investor Atomico, and Gaia backer.

The global fertility services market is expected to expand 16% to $47.2 billion this year, and reach $80 billion in 2026, according to a recent report by ResearchAndMarkets.com. Rising infertility is driven in part by lifestyle changes, including women waiting longer to have children, and expected to boost the demand for treatment. But high prices could put a dent in the market’s growth, the report found, with the average cost of one IVF cycle reaching around $12,000.

In the US and UK these services are-- for the most part-- not covered by medical insurance, or hard to qualify for if offered by the public health system, leaving many facing the prospects of steep or unaffordable medical bills.

By 2021, 36% of large companies -- with 500 workers or more -- covered IVF for employees according to survey data from workforce consultant Mercer. This is up from just under a quarter in 2015.

“This group of fintechs are filling a gap,” said Sarah Kocianski, an independent fintech strategy consultant. “Nobody needs more digital general practice services, but there is an opportunity for something more specific.”

Financing fertility treatments is not new, but consumers have traditionally opted for more generic and expensive forms of borrowing. Nearly 29% of US consumers who have undergone fertility treatments have paid for the services using credit cards, the most common source of financing, followed by savings, according to a study conducted for Bloomberg by personal finance fintech Credit Karma. In the UK the most common payment source were savings, used by 34% of respondents, followed by credit cards.

“For some patients, financing or insurance packages are their only hope of starting a family, but it is essential that what’s offered by insurance or other funding providers is safe and financially manageable,” said Clare Ettinghausen, the director for strategy and corporate affairs at the Human Fertilization & Embryology Authority, a UK government body with oversight over fertility treatments.

The average interest rate for the financing was around 15%, according to the Credit Karma study, which surveyed 2,017 adult consumers in the US and the UK to gauge how fertility treatments were being funded.

While the vast majority of respondents said the cost of the treatment was worth it for them, there have been instances of lenders charging rates as high as 36%, said Colleen McCreary, Credit Karma’s consumer financial advocate. “This worries me,” McCreary said. “If consumers are willing to go to great lengths to grow their family -- and I don’t blame them -- they could find themselves taking on debt at a premium, which could have long term consequences on their finances.”

No matter the source of funding, over two-thirds of respondents said the cost of the treatments had long-term effects on their finances, the Credit Karma survey also found.

Hit On All Sides

“You are getting hit on all sides of the spectrum, financially, physically and mentally,” said Marquita Wright, a 38-year-old sales manager in New Orleans, Louisiana who paid for intrauterine insemination treatments using credit cards. Wright and her husband ended up paying around $6,294 in credit card bills for the treatment, excluding interest.

“At the time it was the only option if we wanted to have kids,” said Wright. “We said the third time would be our last time because it would get too expensive.”

The couple are now parents to twin toddlers. But not everyone who borrows money or taps into savings is as lucky.

Saira Rahman, a senior executive at fintech firm Fundrise, has been trying to get pregnant for eight years. She’s tried IVF in multiple US states, had six miscarriages and several failed transfers. Rahman is thankful that she’s been able to pay the roughly $100,000 she has spent over the years through savings, although she imagines what it would be like, being in debt for something that hasn’t worked.

“If you don’t get pregnant you still have to pay the loan,” Rahman said. “You have a monthly reminder of your infertility. It’s worse than getting a period every month.”

Some fintech companies have taken this into consideration. London-based Gaia blends insurance and lending by using data to forecast how many rounds of IVF a couple will need. Customers will initially be charged a premium usually ranging between 20-30% of the cost of the treatment. If the treatment isn’t successful within the number of rounds estimated by the company, customers do not have to pay back the loan. If the treatment does lead to a baby, they can pay back the full amount in interest-free installments for as many as 5 years.

“Everyone should have the best chance of starting a family regardless of their financial situation,” said Nader AlSalim, Gaia’s chief executive officer and founder.

San Francisco-based Future Family recently launched a product that is interest free which allows borrowers to pay back the loan in 12 months. Until now its interest rates have ranged from around 6% to 18%.

As with other areas in consumer credit, concerns have emerged that rising interest rates and the subsequent cost of living crisis may make it harder for consumers to pay back their fertility loans. Providers are confident their customers -- people seeking to grow families -- are reliable and less likely to default on their loans.

“It’s consumers that are doing something responsible in their life,” said Claire Tomkins, Future Family’s chief executive. “I don’t expect that we would suddenly see crazy losses, but we may see higher rates.”

While several companies started by offering IVF financing, many are expanding to offer financing for a broader set of family-building or reproductive-care services, as they hope to fill a wider gap in the market.

Future Family offers egg freezing plans, a treatment that Gaia is also planning to cover in the future, according to its CEO.

Gülnaz Can​, a 38-year-old marketing executive based in London, has endometriosis, which doctors have told her causes high levels of infertility. While freezing her eggs will make it more likely that she might one day become a mother, the treatment for her would not be covered by the British National Healthcare System.

She is paying with money from her divorce settlement.

“I would 100% borrow if I didn’t have the savings,” Can said. “I can’t tell you how much freedom it gave me even to have four eggs somewhere in the bank.”

Can, who is originally from Turkey, thought about getting treatment there where the service is cheaper. But local rules mean she would have only been able to access her eggs if married, she said. So instead she is spending £2,900 per treatment cycle in the UK. Medication is charged on top of treatment cost and amounted to £1,800 for her latest round, Can added.

“There are lots of differences in access to fertility care across 120 countries,” said Carrot founder and Chief Executive Tammy Sun. “One thing is very similar, not everything is accessible to everyone.”