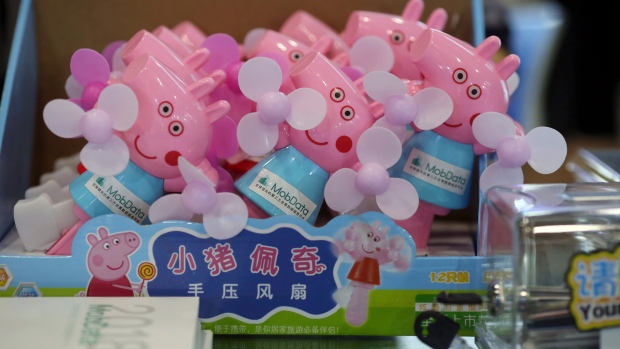 China’s push to cleanse its internet of unsavory elements appears to have claimed an unlikely victim, with thousands of videos of children’s cartoon program “Peppa Pig” reportedly culled from a video app.

Searches of the Douyin app for the program -- which follows the adventures of a young cartoon pig and her family -- yielded no results on Wednesday. Bytedance, which has incurred the wrath of China’s censors in the past, didn’t immediately respond to WeChat messages and phone calls from Bloomberg News.

“Peppa Pig” has become a big hit in China since it first appeared on the China Central Television network in 2015. But the cartoon’s appeal has spread beyond young children to teenagers and adults, with some seizing on the character as a sign of rebellion, according to the New York Times. China Daily says Peppa Pig’s Chinese nickname -- shehuiren -- is a slang term for gangster, spurring grown-up fans to link the show to gangster rap.

People have been posting their own dubbed and edited versions of the program and some have even gotten “Peppa Pig” tattoos, the newspaper said. A two-line rhyme that roughly translates as “Get your Peppa Pig tatt, shout out to your frat” went viral in China.

State media have speculated that the links to gangs and tattoos -- frowned upon in Chinese culture -- may be why Douyin pulled the cartoons. “Peppa Pig” videos have been viewed 45 billion times on the country’s video-on-demand platforms.

The apparent removal of “Peppa Pig” from Douyin comes after China cracked down on other platforms owned by Bytedance. Last month, the authorities demanded a halt to downloads of four news apps run by the startup and by tech giant Tencent Holdings Ltd. They then ordered the shutdown of a joke-sharing app run by Toutiao, Bytedance’s biggest app.

China tightly controls the internet within its borders, censoring certain topics and search terms. The authorities periodically clamp down on media companies, seeking to purge social and web platforms of government criticism, as well as content they deem lewd or risque.

This isn’t the first time children’s characters have been dragged into the world of Chinese censorship. After Xi Jinping proposed repealing presidential term limits in February, Winnie the Pooh was temporarily banned after commentators used the character in posts as a stand-in for Xi.

--With assistance from David Ramli