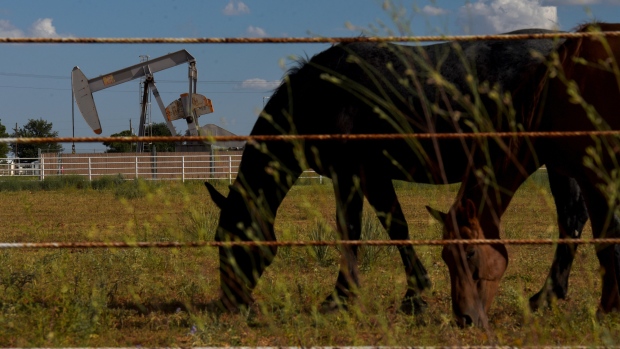 Horses graze in front of a pumpjack near Midland, Texas, U.S., on Friday, Aug. 24, 2018. As the Permian Basin production approaches that of Iran—the third-largest OPEC member—growth has begun to slow, throttled by shortages of pipelines, workers, power, and roads. , Bloomberg

(Bloomberg) -- New Mexico is turning to satellites and artificial intelligence to track methane emissions as soaring oil and natural gas production from the Permian Basin stokes concern about climate change.

The southwestern state will use a model being developed by Descartes Labs to map and quantify how much of greenhouse gas is being released, according to a statement. The data, which will be available to the public, will help oil companies manage methane and guide state inspectors to potential problem areas on an almost real-time basis.

It’s the latest step in New Mexico Governor Michelle Lujan Grisham’s plan for a state rule on emissions of methane, the main component of natural gas and a greenhouse gas that’s far more potent than carbon dioxide. The drilling boom in the Permian, which spans West Texas and New Mexico, has spurred concern about methane leaks.

“We’ve got one of the largest methane hotspots in the country,” Grisham said in a telephone interview. It’s taken the oil and gas industry “too long to accept responsibility and do something meaningful about it,” she said.

One of the challenges of addressing the issue, however, is quantifying just how big it is. At a public meeting last month in Carlsbad, a hotbed of oilfield activity, there wasn’t even consensus over whether methane emissions had risen or fallen.

The methane data initiative comes as New Mexico works toward a goal of cutting greenhouse gas emissions 45% by 2030 from 2005 levels. Lujan Grisham is meeting on Thursday with oil producers including EOG Resources Inc., Occidental Petroleum Corp. and Pioneer Natural Resources Co. to discuss ways to reach the target.

--With assistance from Rachel Adams-Heard.

To contact the reporter on this story: Naureen S. Malik in New York at nmalik28@bloomberg.net

To contact the editors responsible for this story: Simon Casey at scasey4@bloomberg.net, Christine Buurma, Joe Richter