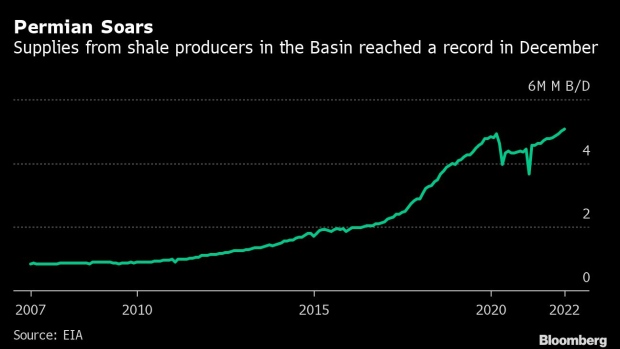 (Bloomberg) -- Oil production in the Permian Basin set a record in December as America’s most prolific shale patch leads the recovery in domestic output.

Crude supply from the Basin, which includes Texas and New Mexico, averaged 4.92 million barrels a day last month, according to the Energy Information Administration. That surpasses the previous record set in March 2020. The agency also forecast that supplies in February would surpass 5 million barrels a day for the first time.

Production from the Permian now exceeds that of each OPEC member except Saudi Arabia. Total U.S. oil output still lags where it stood before the pandemic when crude prices collapsed and forced producers to slash output. The Permian has recovered the most quickly because low production costs make it the most appealing to drillers that are eager to cash in on rising oil prices but must maintain high shareholder returns.

Oil prices rallied more than 50% last year due to demand recovering faster than global production. Supply issues at several producing nations have caused prices to rise further since the end of 2021. Meanwhile U.S. shale drillers remain focused on returning cash to investors instead of expanding production.

(Updates with total US figures in last paragraph)