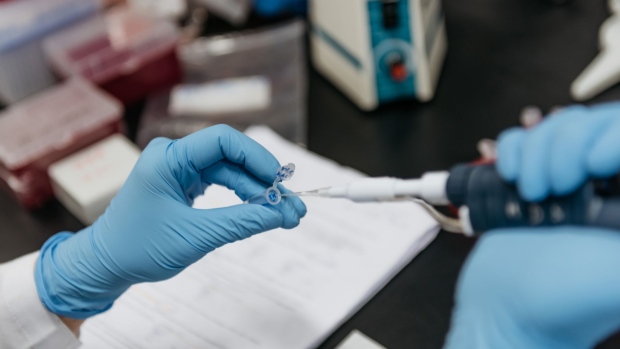 A technician prepares a sample inside the Plasma Nucleic Acids laboratory in the Li Ka Shing Institute of Health Sciences at the Chinese University of Hong Kong in Hong Kong, China, on Tuesday, June 20, 2017. A study led by Hong Kong-based researchers and published this week in the New England Journal of Medicine used DNA fragments in the blood to detect a kind of head and neck cancer called nasopharyngeal carcinoma. The procedure, known as a "liquid biopsy," caught the cancer earlier and more accurately than existing methods -- and ultimately boosted patients' chances of survival. Photographer: Anthony Kwan/Bloomberg , Bloomberg

The British private equity firm could announce an acquisition in the coming weeks, the people said, asking not to be identified discussing confidential information. Separately, Permira is also considering investing in Italian plasma group Kedrion as part of its larger strategy for the sector, the people said.

No final decisions have been made and there’s no certainty an agreement will be reached, the people said. A representative for Permira declined to comment. Representatives for Creat and Kedrion couldn’t immediately be reached for comment outside regular business hours.

Creat has been working with Bank of America Corp. on the sale, which drew interest from a host of private equity firms, Bloomberg News reported in July.

In September, Grifols SA agreed to buy Creat’s Biotest AG for about 1.6 billion euros ($1.8 billion), pouncing after U.S. regulators pushed back on the Chinese group’s expansion into the blood-plasma industry.