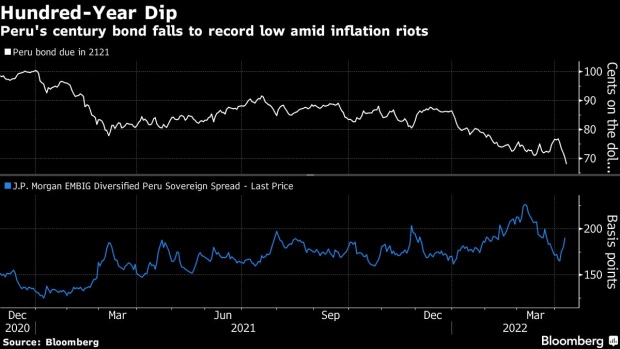 Demonstrators during a protest in Lima, Peru, on Thursday, April 7, 2022. Peru is forecast to raise interest rates Thursday to curb soaring inflation that led to mass protests, riots and a state of emergency in recent days. , Bloomberg

(Bloomberg) -- Peru’s foreign debt has slumped to record lows as a wave of social unrest amid quickening inflation upends a market once famed for its resilience to near-perpetual political crisis.

Government bonds due in 2031 tumbled 6 cents in the past week to trade at an all-time low of 88.5 cents on the dollar, pushing yields up across Peru’s debt curve. The nation’s 100-year bond has fallen to a record 68 cents while the sol is down about 2% in the past five days.

President Pedro Castillo is struggling to stem unrest in response to sky-high food and fuel prices, exacerbated by the war in Ukraine. There is mounting pressure for him to resign, just over eight months into his term and even after he recently survived a second impeachment vote. With five presidents in just over four years, there is a sense that Peru is becoming ungovernable.

“My worry is not a move to the left, it’s just a complete meltdown of policymaking,” Alvaro Vivanco, head of emerging-market strategy at NatWest Markets. “In this environment for global fixed income, it’s very hard to see any value in Peru.”

Peru’s dollar bonds are the second-worst performing in the world so far in April, according to data compiled by a Bloomberg bond index, surpassed only by Sri Lanka which announced plans to suspend foreign debt payments on Tuesday. This year Peru dollar notes are down more than 10%.

The decline reveals a market that is losing patience with Peru. Just 16 months ago, despite a period of political turmoil, the government was able to sell the lowest-yielding century bond ever auctioned by an emerging-market country.

What has changed in Peru is an even greater rejection of the ruling political class and galloping inflation. While consumer prices running at 6.8% are below many Latin American and global peers, it’s still the highest rate since 1998. That’s exposing real economic and fiscal risks.

In a poll published Sunday by Ipsos, 79% of people disapprove of Congress, 76% reject Castillo’s government and 63% want him to resign.

Castillo’s decision earlier this month to declare a state of emergency to prevent looting and protests in the capital after large scale strikes from truckers and farmers further stoked discontent.

Congress also passed a bill vetoed by Castillo to return around 42 billion soles ($11.3 billion) to workers who contributed to a defunct housing fund, and lawmakers are debating proposals to allow people to withdraw their entire pension savings.

Still, Olga Yangol, head of emerging-market strategy for the Americas at Credit Agricole, pointed out that debt sustainability isn’t a concern for Peru, which restored its fiscal rule with a limit for the nominal fiscal deficit at 3.7% of gross-domestic product and 38% of GDP for gross debt.

Peru still holds an investment grade rating on its debt and its spread over U.S. Treasuries is among the lowest in Latin America at 192 basis points. But those metrics may not stand up for much longer, according to Barclays Capital Inc. economist Alejandro Arreaza and strategist Juan Prada.

“Peru is on the path to losing investment grade status,” they wrote in a note. “So far, the effect of persistent political instability on the fiscal position has been limited; however, the measures the authorities are taking, coupled with the deterioration of the growth outlook, could accelerate the weakening of fiscal metrics.”