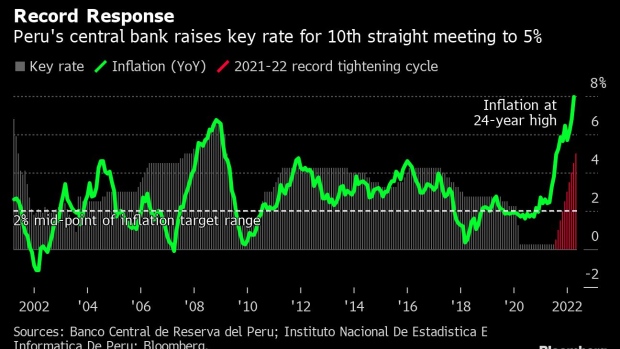 A shopper purchases produce at a market in Lima, Peru, on Thursday, May 12, 2022. Peru's central bank is expected to deliver a 10th straight increase and ninth straight half-point hike to 5% with inflation running at the fastest pace since the late 1990s. , Bloomberg

The central bank boosted its key rate by half a percentage point to 5%, in line with the forecasts of all eight economists surveyed by Bloomberg.

“The significant increase in world prices of energy and food since the second half of last year, accentuated recently by international conflict, has created a large increase in global inflation to levels not seen in many years in advanced economies and in the region,” the bank said in its statement.

Policy makers around the globe are withdrawing stimulus after supply chain disruptions, rising commodity prices and Russia’s invasion of Ukraine fanned inflationary pressures. The US Federal Reserve quickened its tightening pace last week, increasing its key rate by half a percentage point.

Peru is facing strong inflationary pressure from food prices, which may get worse due to a shortage of agricultural inputs caused by the Ukraine war, raising the specter of a national hunger crisis. Many economists, including former Finance Minister Pedro Francke, expect costlier fertilizers to keep pushing food costs higher in the second half of the year.

General inflation accelerated to 8% last month, its highest level since the late 1990s, though that’s lower than the rate in Colombia, Chile and Brazil. Peru targets inflation of 2%, plus or minus one percentage point.

Angel Misayauri, a farmers’ leader in central Peru who led protests last month, said in an interview that the government will not be able to acquire enough fertilizers before the key planting season in July, meaning lower yields later in the year, likely causing higher prices.

In March, leftist President Pedro Castillo survived a second impeachment attempt in congress, and the central bank also needs to gauge whether the political turmoil is having a significant impact on the economy.

The economy will grow 3% this year, faster than Brazil, Chile and Mexico, though slower than Colombia, according to a forecast from the International Monetary Fund.

The central bank is also assessing the impact of the government’s decision to raise the minimum wage by 10% last month to help Peruvians hit by soaring prices, as well as a fuel tax cut.