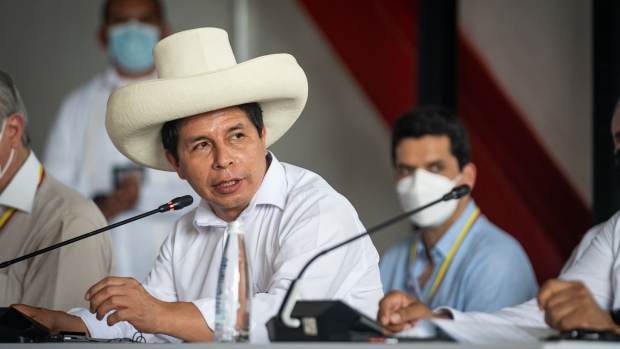 (Bloomberg) -- Peru’s sixth president in four years starts her first day in office seeking to build a cabinet and restore confidence in the $240 billion economy after her predecessor tried to suspend congress and call for a new constitution.

Dina Boluarte vowed to build a unity government and met with the country’s archbishop hours after being sworn in as president of the Andean nation. That followed a tumultuous day in which President Pedro Castillo’s proposals were repudiated by the military, members of his party and the country’s constitutional tribunal, which called his bid a coup. Castillo was impeached and detained Wednesday.

Boluarte, Peru’s first female head of state and Castillo’s former vice president, now has the daunting task of bringing some stability to a nation that has seen every elected president since 1985 impeached, imprisoned or sought in criminal investigations.

In her inaugural address, the 60-year-old Boluarte sought to send a message of calm after a day of intense political drama, saying she would seek a government of national unity. She also pledged to fight the “shameful” corruption that afflicts the country and denounced Castillo’s earlier attempt to dissolve congress.

“There has been an attempted coup d’etat,” Boluarte said in her speech. “I call, therefore, for a broad dialog process among all the political forces.”

The new president is expected to try to finish out the remainder of Castillo’s five-year term — he took office in July 2021 after a protracted post-election period marred by vote recounts and lawsuits prompted by allegations of fraud. The US and the European Union said at the time that the election was clean.

Boluarte vowed to name a cabinet that represents “all democratic forces” and asked for a “truce” in the political infighting to be able to govern and have a “viable country.”

The speech “gives great calm to the citizens and congress too,” Alexandra Ames, a Peru-based political scientist, said. “We will have greater clarity whether her intentions go toward a real government of consensus and national unity when we see how her cabinet is composed.”

Yet reestablishing stability will be a massive challenge for Boluarte, who has little political support after being expelled by the party with which Castillo won the 2021 election. A lawyer by training, Boluarte has limited political experience, having failed in a 2018 bid to be mayor of the Surquillo district of Lima and in a 2020 campaign to be a lawmaker for the capital.

“The appointment of Peruvian Vice President Dina Boluarte to replace Pedro Castillo after the latter’s abrupt ouster on Wednesday may bring some immediate relief for markets. It won’t draw a line under the institutional weakness that’s behind Peru’s persistent political instability, or significantly alter the economic outlook.”

“Boluarte had no previous political experience prior to being elected VP, so she has no support base of her own,” Ramiro Blazquez, head of global research at BancTrust & Co, an investment bank focused on emerging markets, said in a note to investors. “Given the high level of fragmentation of Peruvian politics, we see a high probability of a repeat of the musical chairs.”

Peru’s sol tumbled as much 1.7% against the dollar after Castillo’s attempt to shut congress, then reversed losses as the power grab fell apart, closing Wednesday with a slight gain. The benchmark stock index pared trimmed losses once he was removed and dollar bonds ended the day higher.

“Boluarte is not necessarily perceived as market friendly, but the general sentiment is that anyone is better than Castillo,” said Valerie Ho, a portfolio manager at Doubleline Group in Los Angeles. “Her cabinet appointments will be an important signpost.”

Soon after being sworn in, the new president met with the archbishop of Lima, who signaled his support for a unity government, according to newspaper El Comercio.

Earlier in the day, Castillo’s attempt to suspend congress for nine months, write a new constitution and impose a curfew triggered an immediate backlash, with ministers resigning en masse and the military speaking out against the plans.

In the impeachment session that followed, 101 lawmakers voted to oust Castillo for “permanent moral incapacity,” six voted against and 10 abstained. The leader had survived two previous impeachment attempts since taking office in July 2021 and was facing a third vote on Wednesday, which may have triggered his decision to dissolve congress.

Castillo’s move revived memories of the decision by former President Alberto Fujimori in 1992 to also dissolve congress. At that time, he was supported by his ministers and the military. While the dissolution is a constitutional prerogative of Peru’s president, it needs to follow two censure votes by congress of the cabinet, which didn’t happen during Castillo’s administration.

The former president tried to go to Mexico’s embassy in Lima after his speech but was detained with the help of his own security guards, El Comercio reported, citing sources it didn’t identify. He was later taken to the Diroes police detention center, where former president Fujimori is also held.

The move also triggered international outcry, with Brian Nichols, the US Assistant Secretary of State for Western Hemisphere Affairs, saying that the US “categorically” rejected any acts by Castillo to prevent congress from carrying out its mandate. A State Department spokesperson said in an emailed statement later in the day that the US welcomes the appointment of Boluarte and looks forward to working with her and her administration.

“I understand that everything was carried out within the constitutional framework,” Lula said in a statement. “It is always a pity that a democratically elected president meets this fate.”