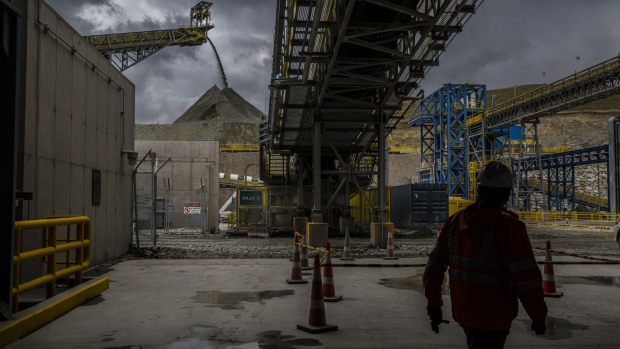 An employee passes in front of belts carrying minerals throughout the copper concentration plant at the Ferrobamba pit, one of the three pits that will be mined by MMG Ltd.'s Las Bambas, in the Challhuahuacho district of Peru, on Tuesday, Jan. 24, 2017. Peru posted its biggest trade surplus in five years in December, as rising copper output and higher prices boosted exports. The South American country last year overtook China to became the world's biggest copper producer after Chile, allowing it to record its first annual trade surplus in three years. Photographer: Dado Galdieri/Bloomberg , Bloomberg

(Bloomberg) -- Community groups in Peru agreed to provide trucking services to MMG Ltd.’s Las Bambas copper mine in a deal hammered out after tensions led to protests and blockades near the site last month.

Las Bambas will provide the Chumbivilcas communities with technical assistance, legal advice and business training, Carlos Castro, manager of corporate affairs at MMG’s Las Bambas, said in an interview. The goal in the medium and long term is to enable the community companies to grow and provide the services to other mining companies as well, he said.

The deal may bolster the Peru government’s claim that mining companies are starting to get on board with a new soft-handed approach to resolving social conflicts. Previous governments tended to send in the military to deal with mining protests. The new strategy of respecting the right to protest while brokering lasting agreements may take longer, but it’s starting to bear fruit, Prime Minister Mirtha Vasquez said in an interview two weeks ago.

To avoid more conflicts with communities in the short term, Las Bambas expects the government to make social investments within its Special Attention Zones initiative. The company will resume the pre-investment studies of the mining corridor, and those will be used by the government when it paves the road at a later date.

Las Bambas has endured sporadic protests along the road since it began operations in 2016, with the blockades most recently forcing the mine to halt work in December. The conflict is a test case for the government of leftist President Pedro Castillo, which has vowed to rely on dialog and consensus building rather than force.

Although Las Bambas and the government are hopeful of finally reaching a lasting solution to strife in Chumbivilcas, there are still dissident factions that want to recover land now used as a road. Those groups point to to laws that protect indigenous territories. They will make a decision on whether to sign a deal with the government and Las Bambas at the end of January.