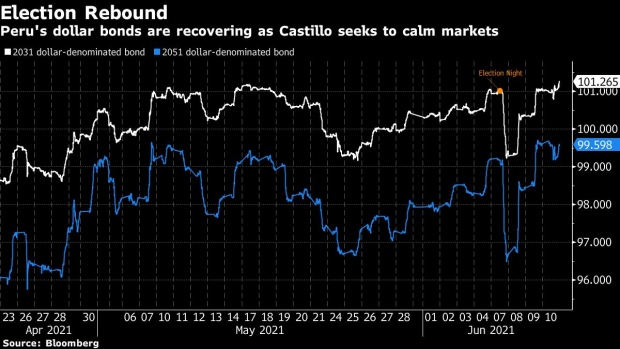 The bank kept its benchmark rate at 0.25% for the 14th straight month, making good on its promise to provide liquidity to an economy hard-hit by the pandemic.

The decision comes as leftist candidate Pedro Castillo is leading the June 7 runoff election against Keiko Fujimori by 50.2% to 49.8% -- fewer than 70,000 votes, with 99% of ballots tallied. Fujimori -- a former congresswoman facing money laundering charges -- is questioning the results and has called for a recount in key districts.

“The board considers it appropriate to maintain a strongly expansionary monetary policy while the negative effects of the pandemic persist on inflation and its determinants,” the bank said in its statement. “Financial markets have shows a high degree of volatility in a context of electoral uncertainty, and the actions of the bank are directed toward attenuating such volatility.”

Thursday’s interest rate decision was expected by all five economists in a Bloomberg survey.

The rise of Castillo, a 51-year-old former school teacher and union organizer with the Marxist Free Peru party, has rattled the country’s markets in recent weeks amid fears that he’ll upend Peru’s economic model.

News of his lead sent Peru’s bonds and currency plummeting before he calmed investors by ruling out radical measures such as expropriations and price and currency controls. He’s also promised to open up talks with business leaders.

“Low and stable core inflation through May limits concerns about the higher headline print, and together with evidence of recovering economic growth and domestic demand losing momentum support the outlook.”

Peru last changed its interest rate in April 2020, when it cut it by a full percentage point -- giving the Andean nation the lowest benchmark rate of any major economy in Latin America.