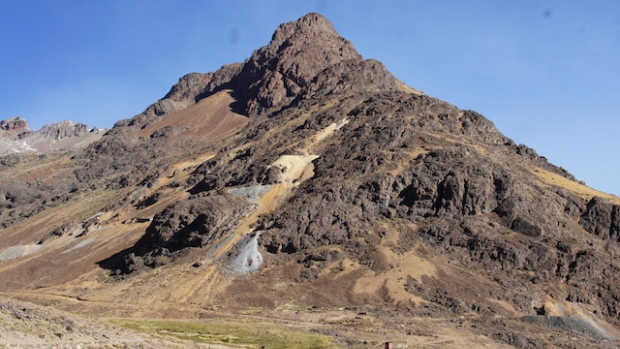 BCGold's Pucacorral project and San Mateo mine in the Lima region of Peru , Image courtesy of Market One Media

The election this summer of a new government in Peru could unlock tens of billions of dollars in new mine development — and open the doors to a new wave of mineral exploration.

The South American nation has a long history with mining — Peru is the world’s third-largest producer of silver and copper, and sixth-largest producer of gold. Metal and minerals account for about 60 per cent of total exports and the country is home to both domestic and international who’s who of miners, including Rio Tinto, Teck, Vale, Xstrata, Newmont, Barrick, Chinalco and BHP Billiton.

Today, according to Business News Intelligence Services (BNIS), about $64 billion US worth of mining projects, including “hundreds” still at the exploration stage, could advance in the near and medium term — if bureaucratic delays and social conflicts are resolved.

The collapse in commodity prices over the past five years has helped stifle Peru’s domestic growth, notes KPMG in a recent Country Mining Guide. Development of new mining opportunities has also slowed following well-publicized controversies over a lack of enforcement of illegal mining in some regions, as well as permitting delays and bureaucratic slowdowns for conventional operators.

A new government, elected in June 2016, is promising to “untangle” the delays through actions such as infrastructure investments in remote rural areas before mine development proceeds, BNIS reported in mid-September 2016. It estimates $20 billion of projects belonging to companies such as Anglo American, First Quantum and Zijin could quickly advance if the roadblocks are cleared.

BMI Research echoed that sentiment in recent analysis, suggesting that the sheer scope of copper projects in Peru is going to offset internal political challenges to the sector.

Meanwhile, junior explorers are digging in.

Adam Szybinski, Vice President Exploration – South America, of Vancouver-based junior BCGold Corp. (TSX.V: BCG) noted that regions with a long history of mining remain amenable to the industry and to exploration and development. Szybinski has been working in Peru since 2006, first with High Ridge Resources and now with BCGold in the historic San Mateo exploration and mining district in the Central Andes, about 100 kilometres east of Lima.

Although a traditional mining area, San Mateo continues to be coveted for exploration, he said. BCGold has two projects — Chanape and Pucacorral, comprising a contiguous 5,785-hectare block of 100 per cent-owned properties. BCGold announced in August, 2016 that it had acquired the properties and raised $1 million in a private placement to explore them for gold, copper and silver.

“This general area was not by any means unexplored — there are many existing and abandoned mines that were active as recently as the 1990s,” Szybinski said. “We are 15 km southeast from Nyrstar’s Coricancha Mine — which has a 60-year production history and is currently under care and maintenance — and 30 km south of Chinalco’s giant 1.5 billion tonne Toromocho copper-gold porphyry deposit.”

Szybinski said High Ridge was very active in the area from 2007 to 2009, spending about  $3 million on and near BCGold’s Chanape property — mapping, sampling and doing geophysics and drilling.

BCGold’s Chanape property surrounds an 850-hectare central claim block — owned by a private Peruvian company — where High Ridge discovered a cluster of poly-metallic epithermal breccias, which were interpreted to be related to a deeper, causative Cu-Au-Mo porphyry intrusion at depth.

“The recent owner of that claim block concluded 11,000 metres of drilling. That work proved High Ridge’s concept and resulted in the discovery of significant epithermal, breccia-style, gold, silver and copper mineralization in distinct pipe-like breccias, above a deeper copper-gold porphyry intrusion,” Szybinski said. “We believe that many of the mineralized structures on that property extend into our immediately adjacent ground. Almost every drill hole on the central property was less than 500 metres from BCGold’s property boundary.” Now, we have to put in some money and exploration effort to further demonstrate that those proven mineralized structures extend onto our property. ”

BCGold is a Vancouver-based junior resource company that has been listed on the TSX Venture Exchange for 10 years, with a focus on copper and gold exploration in British Columbia, Yukon and more recently, Peru. The Company strives to acquire 100 per cent of these opportunities and after cost-effective and diligent exploration to develop drill targets, option 51 to 70 per cent of these properties to third parties in return for some multiple of the Company’s expenditures.

“To date, all past mine production has come from narrow, polymetallic epithermal vein deposits. It is now clear that in certain areas, such as Chanape, that this style of mineralization is spatially related to underlying, intrusion-related porphyry copper-gold mineralizing systems which by definition, are generally large, lower grade and more of an open pit, bulk-tonnage style target.”

Fowler sees potential synergies with other companies active in the area. “BCGold’s exploration strategy at San Mateo is to advance the 100 per cent owned and adjacent Chanape and Pucacorral properties to the option or joint venture stage with well-funded exploration partners. At Chanape, the Company’s strategy is to jointly work with the private owner of the smaller, central Chanape property, in an attempt to secure a well-funded exploration partner to combine these properties and advance our interests.”

“Pucacorral has geology and alternation characteristics similar to our Chanape property,” Fowler said. “This makes the prospects for the discovery of similar breccia-hosted and porphyry-style mineralization at Pucacorral a distinct possibility. This is in addition to the exploration upside and mineral resource potential at our narrow-vein San Mateo mine, which has never been drilled.

“Our hope is that with continued exploration, our San Mateo mine could provide supplementary mill feed to nearby complexes such as Nyrstar’s 600-tonne per day Coricancha bioleach mill complex, situated 15 km down the road from us. As well, Pucacorral’s wide and expansive valleys provide ample room for any possible future plant site, waste rock or mine tailings storage.”

BCGold recently announced commencement of a phase-one exploration program entailing geological mapping, prospecting and sampling on both surface and underground in the San Mateo mine.

Fowler noted that the company is working to engage area residents in the vicinity of its Peruvian assets.

“The San Mateo district local communities get mining and it goes without saying that you have to engage them if you expect to work in their territory. BCGold has a solid Peru management group with experience and a proven track record of working with local communities. We understand their requirements; have established working relationships and we will continue to strengthen them going forward.”

He also believes the new government in Peru is committed to reducing risk for companies investing in exploration. “Peru has a new right of centre government that supports exploration and mining. There’s a lot less uncertainty about resource sector investing now.”

Fowler concludes: “We believe the exploration potential of our Peru properties, BCGold’s ability to raise capital and our Peru management experience and community relations record provide all the required elements that a company must have to be a successful exploration and development company in Peru.”