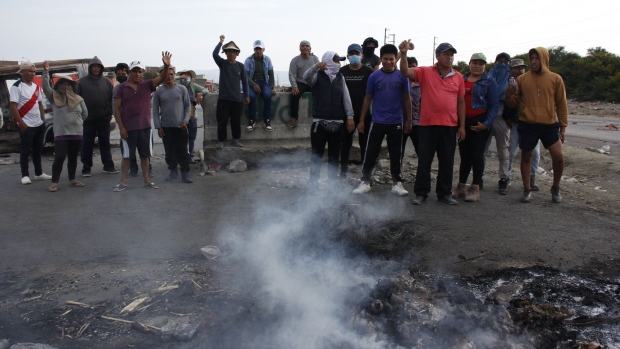 (Bloomberg) -- Peru’s political crisis is threatening to widen rifts in Latin America, with the administration of President Dina Boluarte saying late Wednesday that it had received the backing of governments in Chile, Ecuador, Uruguay and Costa Rica.

Gervasi also said she met with ambassadors from the US and Canada, who sided with the new government. The Foreign Affairs Ministry has previously responded to the countries opposing Boluarte by saying the transition of power obeyed the constitution.

Chile’s Foreign Minister Antonia Urrejola “expressed her critical position regarding the breakdown of democratic order occurred on Dec. 7,” while Ecuador’s Juan Carlos Holguin agreed to continue working to strengthen bilateral relations, according to the Twitter posts.

Canada’s Louis Marcotte said his nation would work with Boluarte “to strengthen democracy and social peace in full respect for human rights and the rule of law,” Gervasi said.

In Peru, the conflict is deepening. The government declared a nationwide state of emergency Wednesday to try and quell protests by supporters of Castillo who wanted the congress dissolved and early elections. At least seven people have died in the clashes. In that context, the new government is keen for international support.

Peru has also called ambassadors from Mexico, Argentina, Bolivia and Colombia for consultations after their government’s comments on the local political situation.

Boluarte was appointed by congress after her predecessor tried to dissolve the legislature and was then ousted on Dec. 7. Lawmakers are currently discussing whether to bring elections forward.