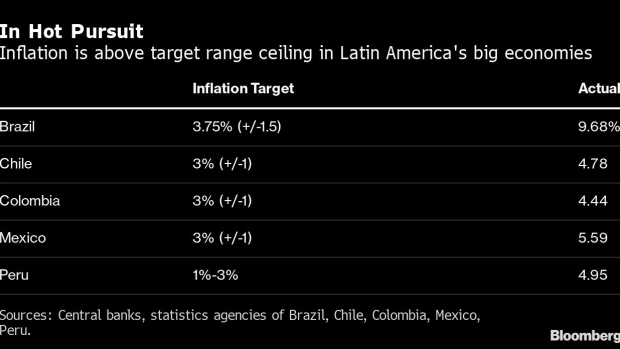 Pedestrians walk through the central market in Lima, Peru, on Friday, Aug. 27, 2021. Peru's economy rebounded in the second quarter, shrugging off political and financial volatility as it recovers from one of the world's deepest slumps last year. Photographer: Angela Ponce/Bloomberg , Bloomberg

(Bloomberg) -- Peru raised its key interest rate by the most since 2010 after inflation breached the upper limit of its target range and political turmoil hit the currency.

The central bank lifted its benchmark rate half a percentage point, to 1%, matching the median forecast of economists surveyed by Bloomberg.

Central banks across Latin America are withdrawing stimulus as inflation accelerates beyond its target in Brazil, Mexico, Colombia, Chile, and Peru. The only major inflation-targeting central bank in the region that hasn’t yet raised borrowing costs is Colombia, which is forecast to do so this month.

Peru’s policy makers are trying to project calm by withdrawing stimulus at a pace that doesn’t look “panicky,” said Alvaro Vivanco, head of emerging-market strategy at NatWest Markets in Stamford, who correctly forecast Thursday’s decision. A half percentage-point increase strikes that balance, he said by phone, ahead of the decision.

After the pandemic hit, Peru’s central bank slashed its key interest rate to 0.25%, the lowest in Latin America, and kept it at that ultra-low level until last month when it raised the benchmark by a quarter-point to 0.50%.

Inflation has accelerated across emerging markets in recent months, as demand picks up before supply chains are fully recovered from the pandemic, and businesses pass on higher global commodity prices to their customers. Peru’s central bank faces those same global trends, as well as domestic volatility.

Since President Pedro Castillo was sworn in July 28, the nation’s currency has weakened the most among emerging market currencies. In his first week in office, Castillo spooked investors by naming a prime minister who’s under investigation for being an alleged apologist for terrorists, among other contentious cabinet picks.

Elsewhere in Latin America, Chile shocked traders last week with its biggest interest rate rise in two decades, and Brazil and Mexico have all increased borrowing costs in recent months. Colombia’s central bank has indicated that it may soon join the regional trend.

Peru’s annual inflation rate jumped to 4.95% last month, its fastest pace since 2009. The 11% slump suffered by Peru’s economy last year was the deepest among major economies in Latin America, and it won’t recover to its pre-pandemic level until 2022, according to a forecast from the International Monetary Fund.