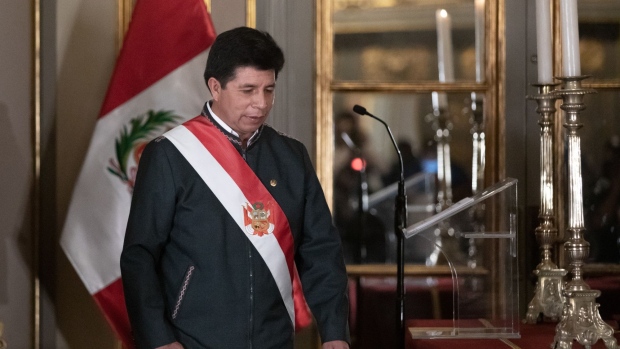 (Bloomberg) -- Peru’s congress approved impeachment proceedings against President Pedro Castillo, the third attempt to remove him since he took office less than 18 months ago, with the government confident it can beat the new trial to remove the leader from office.

In a floor vote late Thursday, the motion to go to the plenary won by a 72-32 margin, with six abstentions. A smaller majority approved starting the trial on Dec. 7 at 3 p.m in Lima. Since taking office in July 2021, the former rural schoolteacher has survived attempts to remove him in Dec. 2021 and this past March.

While 67 of the 130 lawmakers in the unicameral chamber had signed the motion to remove Castillo on grounds of “permanent moral incapacity” to govern, it’s not clear that the opposition-led congress has the votes to remove the president. Prior to the start of proceedings, Justice Minister Felix Choa said that the government’s opponents lack the minimum two thirds, or 87 votes, to win the vote.

“A third defeat for congresspeople seeking to oust the president seems the most likely scenario, which would further bolster Castillo’s case to the public that the legislative branch is ‘working against him’,” Scotiabank Peru strategists including Juan Manuel Herrera and Guillermo Arbe wrote in a note Friday.

Castillo, who was virtually unknown before surprisingly winning the presidency last year in one of the quickest ascents in Peru’s political history, has been rocked by scandal and constant cabinet changes since taking office in July 2021.

The constant clashes with congress led to permanent political instability, with Castillo naming already five prime ministers, a key role in Peru’s government akin to chief of cabinet. Last week, Betssy Chavez took over the role after yet another government reshuffle.

On Thursday after congress’s decision, Castillo reiterated the need for dialog among political figures in an attempt to protect the country’s institutionality.

“I call on the heads of the institutions of the state and the country’s political and social leaders to dialog and to ensure governability,” he said in a series of tweets.

Another sign of the government’s renewed confidence in beating the impeachment process is the scheduling of an Alliance of the Pacific summit in Lima to take place Dec. 14. The summit will be held in Peru because congress had barred Castillo from traveling to Mexico late November, where he was to be appointed as temporary president of the Latin American trade bloc.

--With assistance from Maria Elena Vizcaino and Davison Santana.