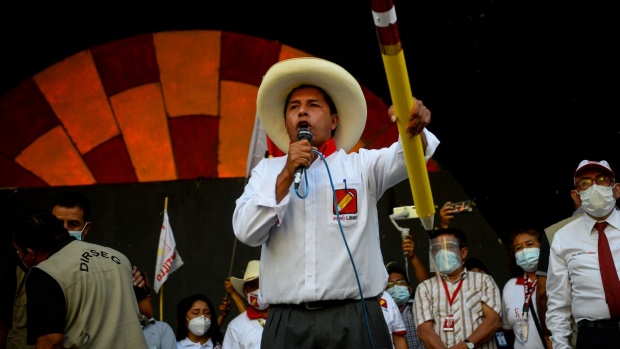 Pedro Castillo speaks during a campaign rally in Piura, Peru, on April 27. , Bloomberg

The survey published Sunday found that Castillo, with the Free Peru Party, had 43% of voter preference versus 34% for Fujimori and her Popular Force party. Some 13% of the respondents said they planned to cast blank or null ballots and 10% said they remained undecided ahead of the June 6 runoff.

Fujimori’s support increased 3 percentage points while Castillo’s increased 1 point since the previous America-Ipsos poll on April 16. Some 48% of the respondents said they were voting for Castillo because he was the “least worst” of the two candidates while 60% said the same thing about their choice of Fujimori.

The survey found that 54% of respondents want the next government to make “moderate changes” versus 32% who want “radical changes.” Only 11% said they wanted to “continue the current economic model.”