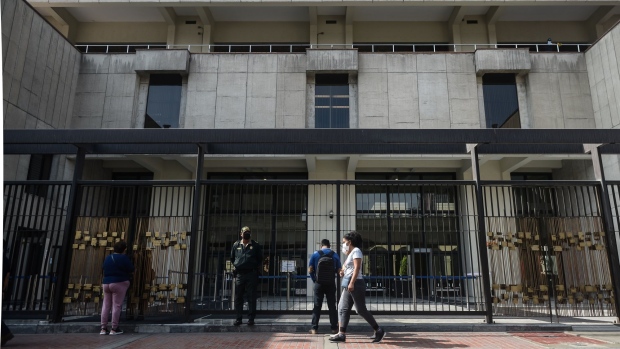 The Central Bank of Peru in Lima, Peru, on Thursday, May 12, 2022. Peru's central bank is expected to deliver a 10th straight increase and ninth straight half-point hike to 5% with inflation running at the fastest pace since the late 1990s. Photographer: Miguel Yovera/Bloomberg , Bloomberg

(Bloomberg) -- In his first week as Peru’s finance minister, Kurt Burneo plans to visit the central bank board and the head of congress with a basic message: Public investment must be increased to stimulate private activity.

“If the government doesn’t stimulate public investment, then we are reducing the possibilities for private investment to become more dynamic,” Burneo said in a wide-ranging interview on Sunday in Lima. “The recovery of public investment will allow fiscal policy to stop being contractive, as it has been up to now.”

Burneo took office last week under difficult circumstances: President Pedro Castillo appointed him as one of six new ministers after he rejected the resignation of Prime Minister Anibal Torres. The cabinet overhaul comes as the president faces investigations by prosecutors while the opposition-led congress works on a third impeachment motion against him.

Burneo said that his first goals in office will be to promote public infrastructure projects, coordinate policy with the central bank and improve relations with congress, despite its relationship with Castillo, to prevent political disagreements from affecting the economy.

“It is simply to agree on what is going to be done ... for them to realize that political clashes can take a deferred toll on the economy,” said Burneo, who faces the challenging task of building enough trust with congress to get a 2023 budget approved. The nation’s monetary policy is affecting consumption and investment, he noted.

“If the Finance Ministry is also developing a contractive fiscal policy we are in the worst of all worlds thinking about economic recovery,” Burneo said. So, he will seek to boost coordination with the central bank board to harmonize measures of both entities and “to agree on adjustments to monetary policy.”

Peru’s central bank is independent and it’s unclear to what extent the finance minister has space to coordinate policy as argued by Burneo.

In June, the central bank reduced its 2022 public investment estimate to 2.1% from a previous 4%, and forecast 2023 public investment at 1.6%. In July, the central bank lifted the benchmark rate to 6%, the highest since 2009, to fight inflation that’s been fueling social tension in the Andean country. The bank is expected to lift rates by half a percentage point again on Aug. 11.

Burneo, 61, a former director of the Inter-American Development Bank in Washington, D.C., has worked in multiple areas as a public servant including as a minister, in the central bank, as an adviser in congress, in the judiciary branch and even in the armed forces.

In a sign of how strained president’s relationship with congress is, lawmakers on Thursday rejected Castillo’s request to travel to Colombia this weekend to attend the inauguration of Gustavo Petro. Some congressmen said he could seek political asylum while abroad to avoid investigations at home.

Castillo is also facing pressure for his removal as a way to pull Peru out of its current political crisis. Some conservatives in congress have pushed for the head of congress to take over the government after removing the president and vice president. Meanwhile, a group of centrist parties are writing up a third impeachment motion to replace Castillo with Vice President Dina Boluarte assuming the presidency.

“An important goal is how to separate, like before, politics and the economy,” Burneo said. “It’s possible to do it.”