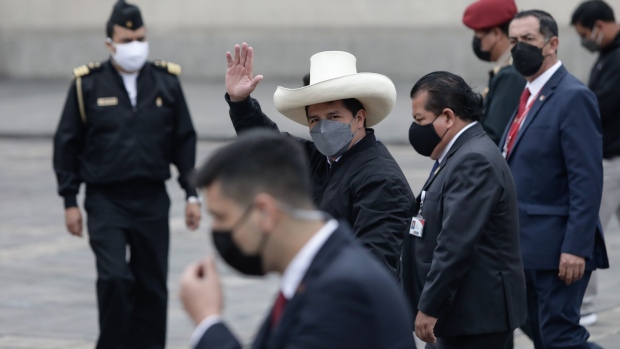 (Bloomberg) -- Peruvian President Pedro Castillo bolstered his chances of surviving an attempt to impeach him by securing last-minute pledges of support from key groups in congress.

Following meetings with party leaders at the presidential palace the night before Tuesday’s vote, Castillo can now count on an alliance of lawmakers from leftist and centrist parties to vote against the motion to allow an impeachment debate.

The alliance includes Castillo’s own socialist Peru Libre party, from which he had recently become estranged, which pledged its support, giving the president 37 votes.

Lawmakers from smaller parties, including Partido Morado, Podemos and Juntos por Peru indicated that they are also likely to vote against it. The Accion Popular party, with 15 legislators, has also agreed to oppose the motion, as has the Alianza para el Progreso party, which also has 15 seats in congress.

On Tuesday, the unicameral congress will decide whether to allow a debate that could lead to Castillo’s ouster after less than five months in office under the constitution’s loosely defined “moral incapacity” clause. The initial motion, promoted by the conservative opposition, would need 52 of the 130 lawmakers to support it in order to pass.

If the motion is approved by congress, Castillo could be gone if 87 lawmakers -- a two-thirds majority -- opposed him in an impeachment vote next week, though such an outcome has become less likely with his newfound backing.

Removing presidents in Peru is easier than in almost any other country. Former President Martin Vizcarra was impeached last year, and nearly every Peruvian president elected since 1985 has been impeached, imprisoned or sought in criminal investigations.

Impeached, Jailed, Wanted: President Is a Dangerous Job in Peru

The sol weakened 0.3% at 11 a.m. on Tuesday morning, while the nation’s dollar bonds rallied slightly.