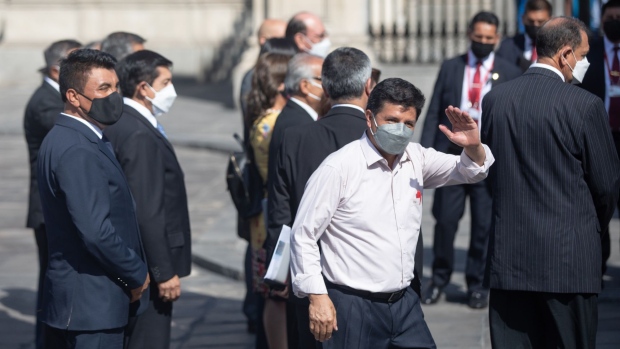 Pedro Castillo, Peru's president, greets attendees at the Government Palace in Lima, Peru, on Tuesday, March 8, 2022. Peru’s leftist president faces the second attempt to impeach him since he took office last July, while his government is also up against a vote of confidence in congress. , Bloomberg

(Bloomberg) -- Peru President Pedro Castillo replaced four ministers amid a mining and fertilizer crisis and after lawmakers presented motions to censure some members of the cabinet.

Alessandra Herrera was appointed mining minister after the government failed this week to reach a deal between MMG’s Las Bambas copper mine and indigenous communities. Congress was seeking to censure the previous minister, Carlos Palacios.

Javier Arce was named agriculture minister. He will be tasked with solving a fertilizer shortage that threatens to plunge the country into a hunger crisis. Dimitri Senmache becomes the new interior minister and Juan Barranzuela will serve as transport minister.

The appointments were the latest attempt by Castillo to reshuffle his government. The former rural school teacher who emerged from obscurity last year to unexpectedly win the presidency lacks experience in public office or a majority in congress and his administration has reeled from one crisis to the next.

He’s had four prime ministers since taking office in late July, and replaced numerous other top officials. The president himself survived a second impeachment attempt in congress in March.

After the swearing-in ceremony, the ruling Peru Libre party criticized the President for making the changes without consulting them.

“President, it is a serious mistake to leave aside the people who elected you,” Peru Libre lawmaker and former Prime Minister Guido Bellido said on his Twitter account. “The population will take it into account and keep it in mind.”

Castillo’s government is facing further turmoil as inflation reached 8% last month, the highest level since the late 1990s. The central bank has responded by increasing interest rates, after the surge in prices triggered mass disorder.

(Updates with comments from lawmaker in sixth paragraph.)