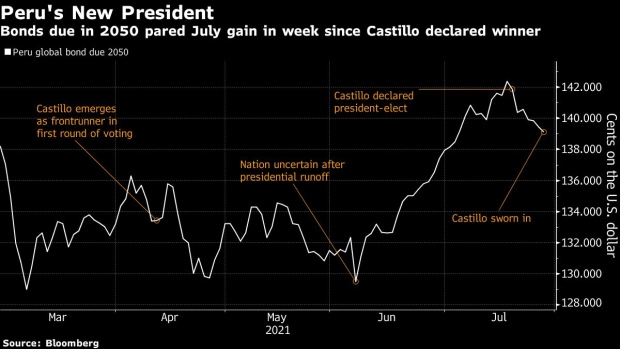 (Bloomberg) -- Pedro Castillo, a former teacher from one of Peru’s most impoverished regions, takes office as the nation’s president with promises to redistribute wealth and rewrite the constitution that are likely to put him on a collision course with the political and business establishment.

Castillo’s inauguration takes place in Lima on Wednesday morning, and will be followed by the announcement of his cabinet in the afternoon.

His pledge to dramatically boost spending on health, education and welfare struck a chord with poor Peruvians who felt they never fully benefited from the country’s mineral riches. But his proposals to rein in foreign mining companies, raise corporate taxes, and the fact that he belongs to a Marxist political party, worry business leaders and investors alike.

Castillo, 51, who has no previous experience of national politics or high office, takes the helm of a nation in turmoil, which last year had three presidents in little more than a week. He successfully tapped voters’ anger after Peru suffered the world’s worst Covid-19 mortality rate and a deeper economic slump than all major economies in the Americas during the pandemic.

In recent days, Castillo was unable to form a ruling coalition in congress, which will make it hard for him to govern, and even puts him at risk of being impeached like former President Martin Vizcarra.

Another possible headache will be his relationship with his own Free Peru party, which has 37 of the 130 seats in congress. The party was founded by Marxist neurosurgeon Vladimir Cerron, who praised autocrats such as Cuba’s Fidel Castro. Castillo has tried to distance himself from party hardliners in recent weeks, who want him to pursue a radical course.

“It was difficult for him to form a coalition, and he has a serious problem to resolve which is his relationship with Peru Libre and, above all, with Vladimir Cerron,” said Fernando Tuesta, a Lima-based political scientist.

Investors are now watching Castillo’s next steps to gauge whether he’ll be more like recent Latin America leftist leaders such as Bolivia’s Evo Morales, Uruguay’s Jose “Pepe” Mujica and Brazil’s Luiz Inacio Lula da Silva, who presided over growing economies and falling poverty, or whether he’s more akin to the more radical leaders of Cuba and Venezuela, whose policies led to hunger and mass emigration.

A key signal will be the composition of Castillo’s cabinet, which he had yet to announce as of 8 a.m. local time. This shows “a high level of improvisation but also it seems lots of wrangling between the different factions supporting Castillo for their quota of power,” said Jo-Marie Burt, an analyst at the Washington Office on Latin America, which promotes human rights and democracy.

Peru’s foreign bonds due in 2050 slipped in early Wednesday trading for a fourth session as traders awaited Castillo’s inauguration. The notes have fallen 3 cents to 139.2 cents on the U.S. dollar since he was officially declared the president-elect last week.

In the election last month, Castillo swept the rural and Andean regions of the country, while his opponent, Keiko Fujimori, won the capital, Lima, and coastal cities in the north. Castillo won by 50.1% to 49.9%.

The vote took place on June 6, but the result was delayed by weeks of vote recounts and lawsuits after Fujimori alleged fraud. The U.S. and the European Union both said the election was clean.