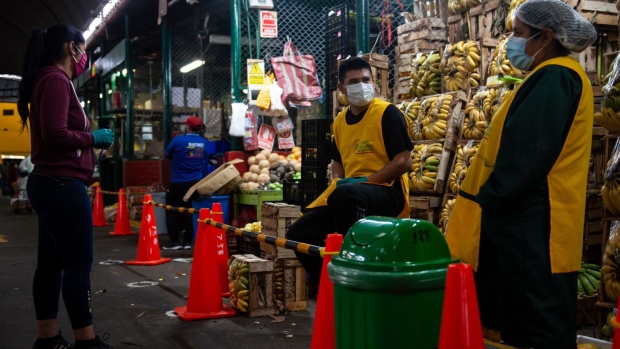 People wearing protective masks work at the fruit market of the La Victoria district in Lima Peru, on Wednesday, June 3, 2020. The International Monetary Fund approved an $11 billion credit line for Peru as the South American nations economy endures a slump that may be the deepest in more than a century. , Bloomberg

Peru will lift quarantine measures for most of the country starting July 1, easing one of the world’s strictest lockdowns as it faces a severe economic slide.

Mandatory isolation orders will end for all but a handful of departments, according to a government decree issued late Friday, which left in place a state of emergency until July 31. Children and the elderly will continue to face restrictions and borders will remain closed.

The country of 32 million enacted severe lockdown measures in mid-March to stem the spread of the coronavirus, deploying soldiers to the streets to enforce stay-at-home measures.

The virus spread rapidly anyway, leaving Peru with nearly 9,000 deaths and more than 272,000 cases as of Friday, the highest caseload in Latin America after Brazil and the sixth-highest in the world, according to data compiled by Bloomberg.

The country has been gradually reopening the economy since May and is due to start the third of four phases next month, but the lockdown has taken a toll. The International Monetary Fund forecasts a 13.9% contraction this year, the steepest drop among major economies in the region.