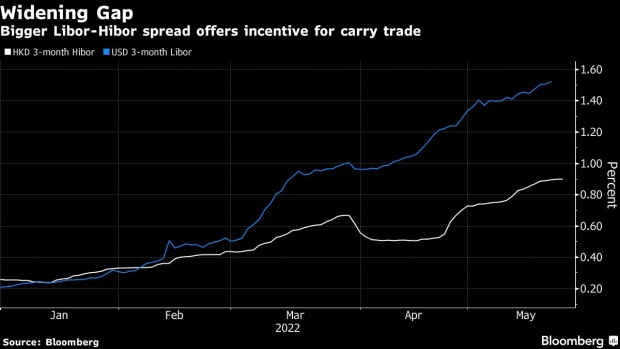 Hong Kong one-hundred dollar and five-hundred dollar banknotes are arranged for a photograph in Hong Kong, China, on Thursday, April 23, 2020. The Hong Kong Monetary Authority intervened for a third straight day this week to defend its currency peg as the local dollar touched the strong end of its trading band. Photographer: Paul Yeung/Bloomberg , Bloomberg

(Bloomberg) -- Bearish bets on the Hong Kong dollar are thriving as a cash glut fuels short positions on the low-yielding currency.

The Hong Kong Monetary Authority mopped up HK$17.6 billion ($2.2 billion) of liquidity this month after the local dollar slid to the weak end of its trading band for the first time since 2019. Still, there remains about HK$320 billion of cash in the banking system. The HKMA aims to keep the currency in a range of 7.75 to 7.85 to the US dollar.

The following four charts show the impact of liquidity on the Hong Kong dollar:

The aggregate balance -- a gauge of interbank liquidity -- has dropped from a record-high of HK$462 billion set in 2021 but remains above pre-pandemic levels. Easy liquidity conditions are keeping local rates subdued, allowing traders to borrow the local currency cheaply and sell it versus the higher-yielding US dollar.

During the previous bout of currency weakness in 2018 to 2019, HKMA withdrew HK$125 billion of liquidity. Analysts see that as a minimum amount this time around. The cash balance fell to around HK$54 billion during that earlier period.

Expectations for tighter liquidity are already being priced in. Hong Kong’s one-year interest rate swap climbed to 2.36% this month, the highest level since 2018.

Rising borrowing costs are expected to further weigh on an economy already reeling from the impact of Covid restrictions. The government this month slashed its economic growth forecast for the year to a range of 1% to 2%, from its previous estimate of 2% to 3.5%.

The increase in Hong Kong borrowing costs is still insufficient to narrow the gap with the US. The spread between three-month Hibor and the London interbank offered rate has fallen to about 60 basis points but it’s still near the widest levels since 2019.

Hong Kong dollar liquidity is likely to tighten rapidly due to rapid Fed rate hikes, said Carie Li, a global market strategist DBS Bank Ltd. in Hong Kong. The currency will probably retest 7.85 per dollar again after the Fed hikes rates again in June, she said. The local dollar was at 7.8498 per greenback at 5:22 pm in Hong Kong on Thursday.

The cost of shorting the Hong Kong dollar remains relatively cheap. Forward points on the currency, which are added or subtracted to determine the forward rate, have been trending down since the start of the year and remain well below zero.