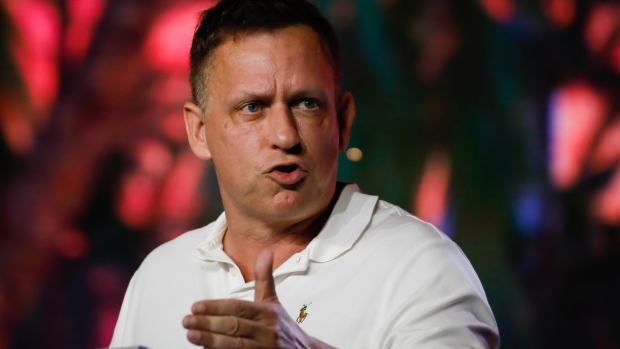 Peter Thiel, president and founder of Clarium Capital Management LLC, speaks during the Bitcoin 2022 conference in Miami, Florida, U.S., on Thursday, April 7, 2022. The Bitcoin 2022 four-day conference is touted by organizers as "the biggest Bitcoin event in the world." , Bloomberg

(Bloomberg) -- Peter Thiel has had a busy 2022, directing time and money into two US Senate races, a Maltese citizenship, a handful of venture capital funds and more than a dozen technology startups. Among his single biggest bet: venture debt.

The billionaire invested $250 million in Tacora Capital, according to the venture debt firm, which was started this year by Keri Findley, a former partner at Third Point. It’s an unusually large investment for Thiel, the size of which hasn’t been previously reported.

Tacora is backed by an additional $100 million or so from other investors, and the firm has agreements so far to lend to four startups. The Austin, Texas-based firm targets private companies in the property-technology and fintech industries, with predictable cash flow and assets Tacora can use to underwrite risk.

Venture debt boomed during the past few years as an alternative or complement to selling equity. This year, with venture capital on track for its biggest global decline in more than two decades, venture debt has proved resilient. Volume in the US hit roughly $25 billion for the first nine months of this year, about the same level as the past three years, according to the research firm PitchBook.

Issuers of venture debt say the market downturn will generate more demand. Blackstone Inc., KKR & Co. and Bain Capital all said this year they’re either starting or expanding their venture debt programs in response to the market. Longstanding players including Hercules Capital said business is surging, especially from mature private companies that want to avoid selling their equity at a discount. “If the market was up and to the right and green, those companies wouldn’t be talking to us,” Hercules Chief Executive Officer Scott Bluestein told Bloomberg in September.

Findley, 39, has been working with corporate debt for years. At Third Point, she invested in loans and securities from the upstart lender Social Finance Inc. starting in 2015. That experience introduced her to Thiel Capital, which also invested in SoFi, and its partners, including Matt Danzeisen, who’s now married to Thiel. Findley engaged in a series of conversations with the partners about specialty finance startups and non-dilutive funding options, she said. She spoke with Thiel “many” times, she said, and eventually pitched him an idea to use capital to finance relatively low-risk assets created and held by startups.

When Findley was named partner at Third Point, she was the first woman and the youngest person to hold that title. She left in early 2017, and later that year, Bloomberg reported that US securities regulators conducted a preliminary probe into Findley’s role in the mispricing of hard-to-value mortgage bonds at Third Point. “I do not believe the previous reporting was accurate,” Findley now says. “I was never questioned or even contacted in regards to this matter.”

Thiel is a powerful ally to Findley and her four-person investment firm, but relying so heavily on one person’s imprimatur can be risky. Located just across town from Tacora in Austin is Mithril Capital, a venture firm co-founded by Thiel with Ajay Royan, who previously worked for Thiel at his defunct hedge fund Clarium Capital.

Since Mithril’s founding a decade ago, the firm has had limited success and some drama. Following the departure of big-name senior managers, including the opensource engineer Brian Behlendorf and JD Vance, whose successful 2022 Ohio senate campaign was backed by Thiel, former employees accused Royan of mismanaging the firm and driving out top talent.

Mithril, named after a fictional metal in the Lord of the Rings books, hasn’t raised a fund in nearly six years. If Thiel, the firm’s anchor, or another investor doesn’t sign on soon, it could run out of money.

The firm’s reserves of capital left to invest from its most recent fund have dwindled to 10%, according to PitchBook. This year, it made four investments to support companies already in its portfolio and added one new startup, Genetesis Inc., which makes health diagnostic equipment.

“If a firm isn’t making new investments, it’s hard to stay relevant in the market. They fade away quietly,” Hajer said. “People call them zombie funds.”

Several of Thiel’s other investment firms are thriving. San Francisco-based Founders Fund is sitting on more than $6 billion in committed capital and New York-based Valar Ventures has more than $1 billion.

Tacora is fielding plenty of applications from borrowers, Findley said. Conversations are underway with more than a dozen companies, she said. That the market downturn could push more startups to seek venture debt is, Findley said, “lucky” timing.