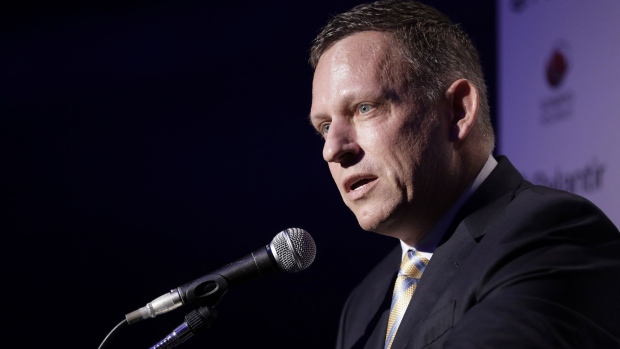 (Bloomberg) -- For years, even as Facebook came under increasing scrutiny from Washington politicians and regulators, the controversial billionaire Peter Thiel kept his seat on the company's board, and, with it, his position as one of Silicon Valley’s most important power brokers. Now, Thiel is finally giving up that seat — one that he has held since 2005 — a move that will likely spare Meta Platforms Inc. from added political headaches. It will also allow Thiel to do what he has long signaled was a desire: to go all-in on far-right politics.

The investor and co-founder of PayPal Holdings Inc. and Palantir Technologies Inc. has long seemed ambivalent about Facebook, a company where he was the first outside investor and a mentor to Chief Executive Officer Mark Zuckerberg. He sold much of his stock shortly after the company went public in 2012 and has been privately critical of the social network, even as he acted as an intermediary between Zuckerberg and then-President Donald Trump. (Thiel spoke at the 2016 Republican National Convention and served as a member of the presidential transition team.)

But the relationship between Thiel and Zuckerberg has grown chillier, especially over the last year, as Thiel has become a prominent supporter of political candidates who have added Zuckerberg to their lists of foes—targeting him alongside civil rights activists, democratic politicians, private equity executives and others they say are ruining America.

For example, Thiel is the largest donor to a political action committee supporting JD Vance, who previously worked at one of Thiel’s venture capital firms, and is now running for Senate in Ohio. Last summer the PAC aired a television ad in which Vance decried “a ruling class, an elite, who don’t actually care about the American nation,” as an image of Zuckerberg flashed across the screen. Thiel gave $10 million to the Vance PAC last March, according to Federal Election Commission filings. After Thiel, conservative megadonors Robert and Rebekah Mercer are the PAC’s second- and third-largest contributors, giving $100,000 and $50,000, respectively.

The $10 million donation to support Vance was by far the biggest single political contribution Thiel had ever made, but he has signaled a willingness to spend much more in the service of candidates aligned with Trump and the populist-nationalist movement that has sprung up around the former president. A month after giving to Vance, Thiel wrote a second $10 million check for a new PAC supporting the Arizona senate candidacy of Republican Blake Masters, who is a longtime Thiel aide and served as the cowriter on his book, Zero to One.

Like Vance, Masters has portrayed the tech industry, and Facebook, as a key adversary. He’s claimed — without evidence — that Facebook “threw the election for Biden” and has sought to connect the company to false claims, propagated by Trump and his allies, that the 2020 election was stolen. Thiel’s PAC, Saving Arizona, has amplified these messages, airing an ad that attacked one of Masters’ primary opponents, the current state attorney general Mark Brnovich, for certifying Biden’s election victory.

Bloomberg News reported that a person close to Thiel said he’d left the board to avoid creating a distraction. He plans to focus on supporting Masters, Vance and other candidates with similar views. The move comes as Thiel has intensified his political engagement. In addition to the PAC donations, Thiel has held fundraisers for both Masters and Vance in recent months. In late December, Masters announced that he was minting a batch of 99 non-fungible tokens, or NFTs. They went on sale for $5,800, the maximum contribution allowed for an individual donor, and included the promise of “a piece of Zero to One history” (in jpeg form) and “exclusive access to parties with me and Peter,” among other perks. The promotion sold out, netting Masters about $575,000 for his campaign.

Thiel has also supported the campaign of Harriet Hageman, who is running to replace Wyoming representative Liz Cheney, one of a handful of Republicans to vote to impeach Trump after the failed insurrection on Jan. 6, 2021. Thiel donated $5,800 to Hageman in September, and last month hosted a fundraiser for Hageman in which he cast Cheney as “treasonous,” according to Politico’s Alex Isenstadt. “The way we’re going to defeat the left, the way we’re going to roll them back, it’s going to start in the Republican Party, that’s where we have some problems, we’ve got to clean house there first,” Thiel said, according to Isenstadt.

Zuckerberg has addressed Jan. 6 in starkly different terms. In Congressional testimony last year, he called the attack on the Capitol “an outrage,” and a “disgraceful moment in our history,” blaming former President Trump. By contrast, according to the person close to Thiel, his priority will be to advance the Trump agenda ahead of the November election.