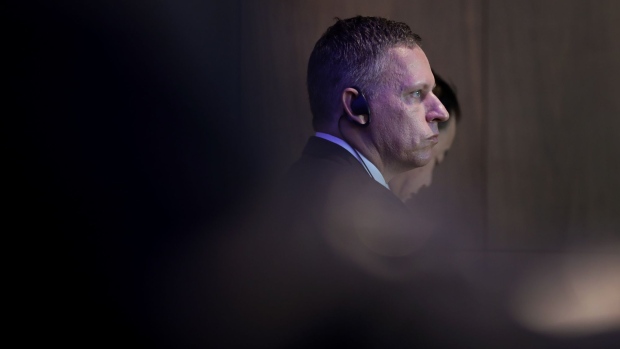 “You’re supposed to just buy Bitcoin,” he joked to an assembled crowd in Miami. “I feel like I’ve been underinvested in it.”

Thiel said his only hesitation about investing was that he thought “the secret was already known by everybody.” He concluded that “I think the answers are still to go long” on Bitcoin. Adding: “Maybe it still is enough of a secret.”

Thiel, a longtime libertarian, said that cryptocurrencies’ rise was a rebuke of the world’s financial systems. “Bitcoin at $66,000. Is it going to go up? Maybe,” he said. “But it surely tells us that we are at a complete bankruptcy moment for the central banks.”

Thiel spoke for more than an hour during an interview hosted by the Lincoln Network, a right-leaning nonprofit that seeks to bridge the divide between Washington and Silicon Valley. Thiel also sounded an alarm about the development of artificial intelligence. He suggested that crypto was libertarian because it’s a “force for decentralization,” and that by extension: “AI, especially the sort of low-tech, surveillance form, is essentially communist,” because it’s a force for centralization.

Thiel doesn’t want to outlaw AI, he said, but he would like the people building it to “think about how they’re working on a technology that’s going to destroy the world.”

The event took place at the Pérez Art Museum Miami, in a city that has become a favored location for crypto investors. Miami’s mayor has courted tech founders, and it has emerged as a hub for technology, venture capital and finance. Crypto startups EToro and Blockchain.com Inc. both recently announced new offices in the city, while venture capital firm G Squared said earlier this month that it would open a new Miami office, joining other firms including Blackstone Group Inc. and Goldman Sachs Group Inc. that have expanded in the region.

Thiel’s own Founders Fund was an early promoter of Miami as a new tech hub, with fund principal Delian Asparouhov tweeting in December, “ok guys hear me out, what if we move silicon valley to miami”? The venture capital firm announced later in the year that it had signed a multi-year lease for space in the city’s hip Wynwood neighborhood. Thiel, meanwhile, was reported to have spent $18 million on two adjacent waterfront mansions in Miami Beach.