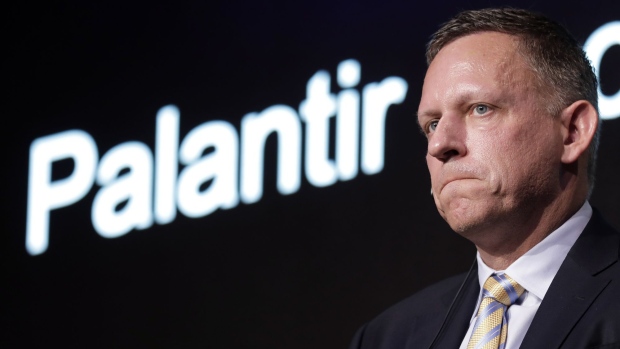 Billionaire Peter Thiel was a no-show at the investor day leading up to the direct listing for Palantir Technologies Inc., the data-mining company he founded 17 years ago. And no one from the company will ring the bell at Palantir's market debut.

Thiel's absence from the Wall Street pomp belies the outsize influence he'll continue to wield long after the company goes public. Thiel will have more control over the company than any other individual or investor group, and an unconventional voting structure will award additional power to Thiel and two other co-founders in perpetuity.

Palantir isn’t the first company in Silicon Valley to use super-voting shares to cement control for its founders. Other tech leaders including Mark Zuckerberg, Snap Inc. Chief Executive Officer Evan Spiegel and WeWork CEO Adam Neumann were all given disproportionate control over their companies as they headed to the public markets. But good-governance advocates say that handing so much power to a limited group of people could undermine the standards of accountability meant to be enforced by the market, making it harder for smaller shareholders to exert their will in cases where they believe a company is being poorly run.

“They set it up so Peter Thiel can still sort of run it like a private company and still have the advantage of being public,” said Michael Weisbach, a professor at Ohio State University’s Fisher College of Business who specializes in corporate governance and private equity. “They obviously want to keep control of this company and don’t want a bunch of outsiders.”

Palantir has been unapologetic about its governance mechanics. Its CEO, co-founder Alex Karp, has repeatedly told would-be backers to pick a “different company” if they don’t like the way it operates.

Few expect Palantir’s voting mechanics to derail the company’s planned public listing. This year, Palantir expects to take in more than US$1 billion in revenue and, for the first time, turn an adjusted profit, excluding stock compensation. While Weisbach said that its valuation would have been higher without the tightly controlled governance and voting structure, there are optimistic signs about how public investors will receive the company. Banks have reportedly told investors that Palantir could start trading at a market valuation of almost US$22 billion.

Representatives for Thiel and Palantir declined to comment for this story.

Palantir’s technology collects and combines ever-changing data streams into what it calls a single “source of truth,” which its clients can then mine for meaning and use to make decisions. Applications vary widely based on the customer. Merck KGaA uses Palantir’s software to speed drug discovery. United Airlines Holding Inc. uses it to optimize flight routes. And the U.S. government uses it for tasks including identifying roadside bombs in Afghanistan, catching tax cheats and, more controversially, locating people who entered the U.S. illegally for deportation.

Longtime Palantir investor Eric Munson of Adit Ventures said that the company’s aggressive voting structure is necessary to ensure Palantir can continue to operate without influence from outside parties who disagree with its business. Some of the company’s work is politically sensitive, he added, and its voting structure will mean that the founders can pick and choose clients whose interests align with those of the U.S., regardless of investor pressure. "I like that there's no ambiguity where the leadership stands,” Munson said.

That reasoning has limited purchase with groups like Institutional Shareholder Services, a proxy advisory firm. “The problem is power without accountability,” said Marc Goldstein, the group’s head of U.S research. Goldstein cited Mark Zuckerberg’s control over Facebook as a textbook example of too much control accruing to one man. As a long-serving board member of Facebook, Thiel knows that structure well.

“Palantir is talking about how different they are from Silicon Valley, and yet they are taking on the absolutely worst aspect of Silicon Valley with this,” Goldstein said.

Palantir has always been tightly held. It has only recently started adding independent board members, and even the independent directors have close links to Thiel, the board chairman. This summer, Palantir appointed three new directors, including 8VC partner Alexander Moore, who was an early Palantir employee, and former journalist Alexandra Wolfe Schiff, who wrote a book called “Valley of the Gods” that was largely about Thiel. Palantir has said it would comply with Securities and Exchange Commission rules that it have a majority of independent directors within one year of going public. Currently, the company says three of its six current board members are independent.

Even when it does add more directors, though, power will remain concentrated in the hands of a few people. According to Palantir’s SEC filing, three of the company’s founders—Thiel, Stephen Cohen and Karp—will receive Class F shares entitling them to 49.99 per cent of the company’s voting power, control that will not be directly tied to the number of other shares they own. The structure is highly unusual but not without precedent, according to Weisbach, who said the Ford family set up a similar system more than 60 years ago at Ford Motor Co. That company also established that a percentage of the vote would remain with the family regardless of its financial stake in the company.

Even without a mechanism to hand more voting control to the founders, Thiel would still wield substantial influence at Palantir. As the largest investor in the company, he will own 29.8 per cent of all Class B shares, which give the holder 10 votes per share. Thiel owns more Class B shares than any other individual or entity, including Founders Fund, the venture firm Thiel founded. That group, where he still serves as a partner, holds the next highest amount at 12.7 per cent.

Thiel also has a stake in several of the entities that have invested in Palantir. Besides his involvement with Founders Fund, Thiel is an investor in funds managed by venture capital firm 8VC and in the merchant bank Disruptive Technology Advisers, which oversees Palantir backer Disruptive Technology Solutions, according to people familiar with the matter who asked not to be identified discussing private information.

Henry Hofman, a corporate governance researcher at Morningstar corporate ratings firm Sustainalytics, said the net result was another unfortunate example of Silicon Valley founders grasping for too much control. “Anything that strays away from the one-vote, one-share structure, we see that negatively,” he said.