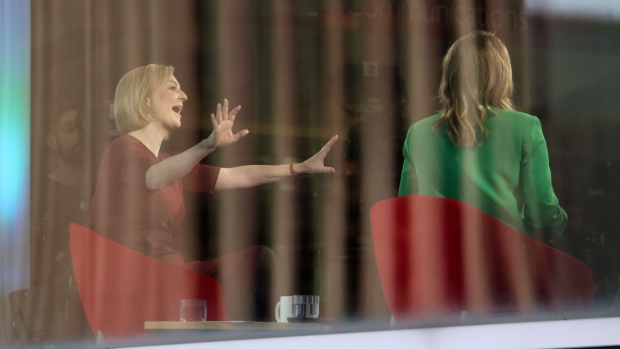 Liz Truss, UK prime minister, left, attends an interview during the Conservative Party's annual autumn conference in Birmingham, UK, on Sunday, Oct. 2, 2022. Truss acknowledged her UK government mishandled the announcement on unfunded tax cuts which triggered a week of turmoil in financial markets, while insisting her approach is the correct one. , Bloomberg

A petition calling for an immediate UK general election is rapidly gaining support, racking up about 4,000 new signatories every hour.

The petition now has more than 400,000 supporters, well over the 100,000 needed for it to be considered for debate in Parliament. The growing number reflects anger at the government’s handling of the economy, the pound hitting a record low and banks pulling mortgage products.

“The chaos engulfing the UK government is unprecedented,” the online petition said. It was launched before Chancellor Kwasi Kwarteng’s late-September mini budget, according to The Independent. “Let the people decide who leads us through this turmoil,” the petition said.

No date for such a debate has yet been set. There are currently 14 petitions waiting for a parliamentary debate, although this one has by far the most signatures.

“A change in the leader of the governing party does not trigger a general election,” the government said in a Sept. 20 response to the petition.