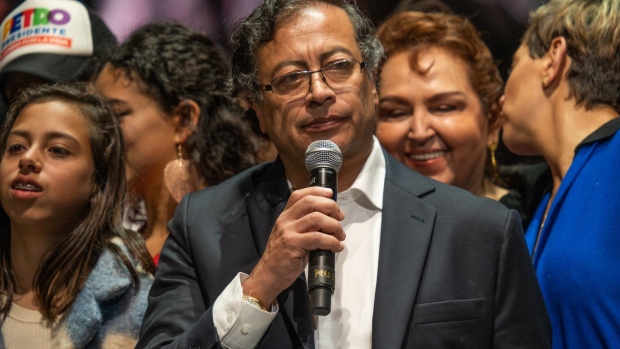 (Bloomberg) -- President-elect Gustavo Petro formed an alliance with Colombia’s powerful Liberal Party, which will likely make it easier for him to get laws through congress over the next four years.

“This will allow the president-elect to overcome a political hurdle,” and enact his government plan, the Liberal Party said Wednesday evening, in a statement signed by its leader Cesar Gaviria.

In congressional elections in March, leftist parties including Petro’s Historic Pact got their largest-ever number of seats, but fell short of an overall majority either in the senate or the lower house. The coalition with the Liberals reduces the chance that Petro will face a governability crisis, though he may be forced to tone down some of his more radical proposals to keep his allies on board.

The Liberal Party is “going to look to extract a lot of concessions,” said Sergio Guzman, director of Colombia Risk Analysis.

“That may mean now that Petro will have to manage expectations within his own party because they’re sky high, and now he’s about to make some pretty substantial concessions on the economy and taxes in particular,” Guzman said. “If he’s not flexible, he’s not going to get majorities.”