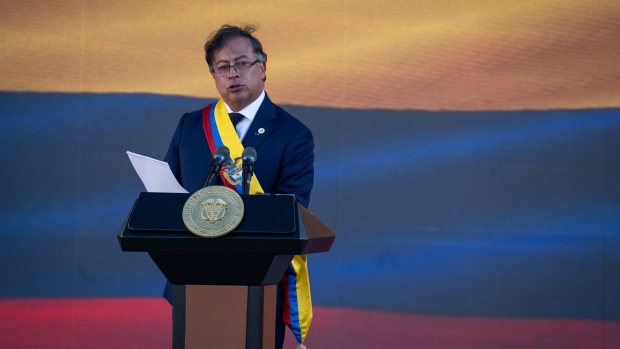 (Bloomberg) -- The plan by Colombia’s new leftist government to more than triple the tax on dividends may virtually kill off its small stock market, according to one of the nation’s biggest investors.

The government of President Gustavo Petro sent a bill to congress on its first day in office this month which would increase taxes on Colombia’s richest citizens in a bid to fund social spending.

Petro’s plan treats dividends as ordinary income, effectively raising the tax to 39% for Colombians in the top income bracket. The current levy on dividends is 10%. He is also proposing a windfall tax on oil and mining companies and a wealth tax. Congress is likely to make changes to the bill before it becomes law.

Colombia’s benchmark Colcap stock index has lost investors 54% over the last decade on a US dollar basis, the worst performance of more than 90 primary equity indexes tracked by Bloomberg. Trading volumes are on a downward trend.

A series of tender offers launched by billionaire Jaime Gilinski for some of Colombia’s biggest companies, including Grupo Sura, has also depressed volumes by reducing the number of shares available to trade.

“We’re conscious of the need to increase revenue for fiscal sustainability and for higher social investments,” Perez said. “But there are impacts on the capital markets that need to be analyzed.”

Grupo Sura itself won’t be badly affected by the bill, Perez said.

Grupo Sura reported a net income of 558 billion pesos ($126 million) in the second quarter, up 30% from a year earlier, helped by earnings from its insurance and banking business. The company’s businesses include Sura Asset Management, and Proteccion, one of the nation’s top two pension providers.