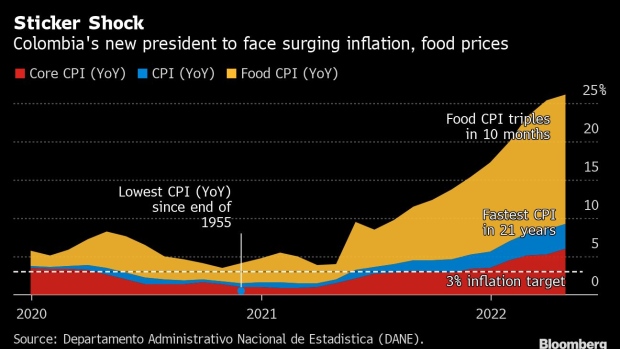 Gustavo Petro, presidential candidate of the Colombia Humana party, speaks during a campaign rally in Cucuta, Colombia, on Thursday, May 5, 2022. Colombia's May 29 election is being closely watched after neighbor Peru and then Chile voted in unconventional leftist presidents within the past 12 months, showing how inequalities aggravated by the pandemic are shaking up Latin American politics. , Bloomberg

(Bloomberg) -- Colombia’s central bank is harming the economy by raising interest rates to fight inflation, and the institution needs to be run by economists with a broader range of opinions, presidential front-runner Gustavo Petro said.

“The only thing that raising interest rates does is to kill the national economy even more, therefore you disincentivize investment,” the leftist candidate said in an interview while heading to a campaign event last week.

Colombian inflation is currently being caused by an increase in imported food costs, rather than by overheating, so should be addressed by policies to boost agricultural output, such as by subsidizing fertilizers, he said. The bank’s board should have “a plurality of visions, and not just one ideology,” he added.

Petro, 62, said that if he wins he’ll appoint as central bankers “people with a background in production,” who can move monetary policy toward boosting output and employment, as well as protecting macroeconomic stability and price stability.

Colombia’s next president will be able to name two new central bank board members half-way through their four-year term. Since the finance minister also sits on the policy committee, that means Petro could potentially appoint three of the seven-member board.

All the major central banks in Latin America including Colombia’s have increased interest rates in recent months as demand rebounded from the pandemic and food and fuel costs surged. Colombian inflation accelerated to 9.2% last month, its fastest pace in more than two decades, while food prices rose 26% from a year earlier.

Petro said he would respect the institution’s independence, and isn’t contemplating any constitutional changes to alter its mission.

The central bank’s press office declined to comment. The bank has raised its key interest rate 4.25 percentage points since September, to 6%.

He says Colombia needs to raise about 40 trillion pesos ($9.7 billion) in tax revenue to fund new social programs and “gradually” cut the deficit.

“We can’t eliminate the deficit completely from one day to the next, but we can shave some points off this deficit, gradually, year after year, trying to have finances that are much more sustainable,” he said.

A lower deficit will also allow the nation to seek cheaper financing for its existing debt, he said.

Petro did manage to cut debt slightly when he was mayor of Bogota from 2012 to 2015. Despite that, it’s clear that investors don’t trust him to do that as president.

The cost of insuring Colombia’s debt against default with credit default swaps, a gauge of investor risk perceptions, has approximately doubled over the last year as Petro gained in polls. That’s a far larger increase than the cost of insuring the bonds of regional peers such as Brazil and Mexico.

Colombians vote on May 29, with a likely runoff three weeks later. A poll published this week showed Petro with a 13 percentage-point lead over Gutierrez in a runoff.