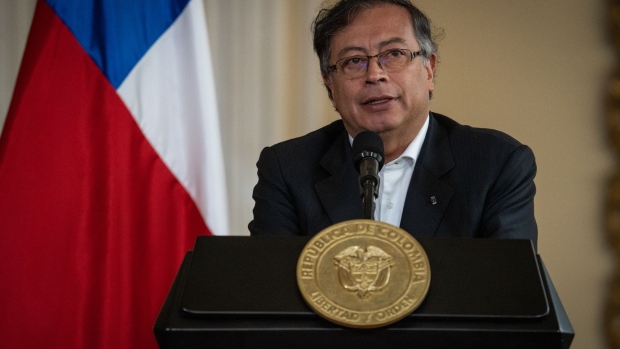 Gustavo Petro, Colombia's president, speaks during a joint press conference with Gabriel Boric, Chile's president, at the Presidential Palace in Bogota, Colombia, on Monday, Aug. 8, 2022. Petro began his four year term Monday by holding meetings with Chile's Boric and with representatives of Mexico, Cuba and the United States. , Bloomberg

(Bloomberg) -- Wealthy Colombians and energy exports are being targeted with new taxes on the first day of President Gustavo Petro’s administration.

The incoming leftist government, which took office on Sunday, said it is seeking to cut inequality and raise money for poverty-fighting programs with the measures.

The bill sent to congress on Monday proposes a permanent annual wealth tax of 0.5% on assets of more than about 2.7 billion pesos ($630,000), rising to 1% on fortunes exceeding about 4.6 billion pesos.

It would also introduce a 10% export tax on oil, coal and gold when their prices are above an international reference price.

People earning more than 10 million pesos ($2,300) per month would pay higher taxes on their salaries, while those earning less would be unaffected, according to the government. Investors overseas who own shares in Colombian companies face an increase in the dividend tax to 20%, from 10%.

The bill seeks to increase the scope of an existing carbon tax, as well as to introduce new levies on sugary drinks, ultra-processed foods and single-use plastics.

The tax bill is a key test of the new government’s strength in congress, after Petro forged alliances with several parties in congress to form a ruling coalition. The measures are likely to be changed by lawmakers in debates over the coming weeks.

The law aims to boost 2023 tax revenue by the equivalent of 1.7% of gross domestic product. During the campaign, Petro had called for tax increases equivalent to about 5% of GDP, so the first tax hikes are relatively modest in scope.

Its still unclear how much of the extra revenue will be used to cut the deficit, said Ana Vera, chief economist at Panama-based IN ON Capital. The “health taxes” on sodas and processed foods could also put pressure on consumer prices, she said. Annual inflation accelerated to its fastest pace since 1999 last month.

Petro took office with government debt near record levels, which will make it challenging to him to meet promises of more education and welfare spending while also keeping the deficit under control.

Colombia tax revenue is about 19% of GDP, the lowest among members of the Organisation for Economic Co-operation and Development after Mexico. The nation lost its investment grade credit rating last year.