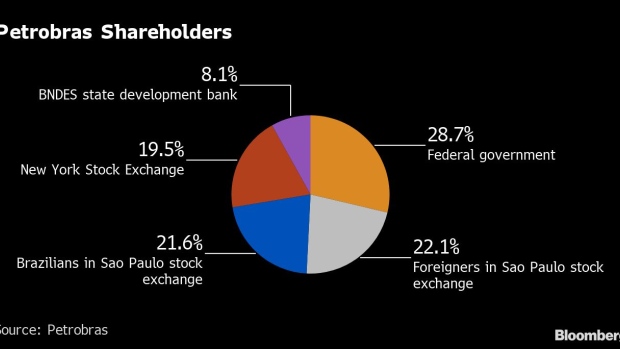 (Bloomberg) -- Petroleo Brasileiro SA investors excluded from its $2.95 billion “carwash” corruption settlement in the U.S. are signing up for a class-action case in the Netherlands -- where the Brazilian oil producer has failed to get the lawsuit thrown out on procedural grounds.

The Stichting Petrobras Compensation Foundation, the claimant in the suit, has grouped investors outside of the U.S. who lost money when Petrobras shares and bonds tanked in the wake of a sprawling kickback and corruption probe known as Operation Carwash, which started in 2014.

“We have many investors from Brazil, institutional and a lot of retail investors, and there will be more investors coming over to our side,” according to Adam Foulke, a senior vice president at ISAF Management, which cooperates with the foundation to identify eligible investors for litigation in the Netherlands.

While ISAF can’t identify who has signed up due to non-disclosure agreements, Foulke said more than 100 large investment groups have joined, and more can continue to until there is a judgment or a settlement.

“These are institutional investors that Bloomberg reports on every day,” said Foulke, who added that ISAF began offering online registration in June and has since seen a pickup.

Petrobras said in an emailed statement that it was a victim of actions by corrupt executives in the scheme, has cooperated with authorities, and will continue to defend itself in the Netherlands.

SPCF plans to file its next brief this month, where it will argue that the oil producer broke local laws in all of the six countries outside the U.S. where shares are available, not only in the Netherlands.

In May, it won an important ruling at the District Court in Rotterdam that gave it standing to sue Petrobras in the Netherlands. Petrobras said it will continue to defend itself during the merit phase of the case.

The class action was first filed in 2017 and has largely fallen off investors’ radar, even though SPCF could potentially represent more shareholders and bondholders than the U.S. class action that was settled in 2018. In the U.S. case, total damages were estimated at more than $10 billion, which means total damages in the Dutch case could go as high as $15 billion, according to calculations by Battea Class Action Services, which is working with SPCF to process investor eligibility.

“We bring this on behalf of an absent class,” said Flip Wijers from Lemstra Van der Korst, the law firm representing SPCF. “We identify who are the victims of the stock drop and bond price drop following the Carwash fraud.”

Under Carwash, corrupt Petrobras executives took bribes from contractors and split the proceeds with political benefactors who helped them get the jobs in the first place. The revelations sent top managers at the state oil company, business leaders and politicians to jail in what became Brazil’s biggest graft scandal. The investigation prevented former President Luiz Inacio Lula da Silva from running in the 2018 elections.

Wijers expects it to take about a year for a judgment on what is known as declaratory relief.

In its statement, Petrobras said any judgment from the declaratory relief case wouldn’t involve a monetary payment even if it loses, and that could only be pursued through further litigation.