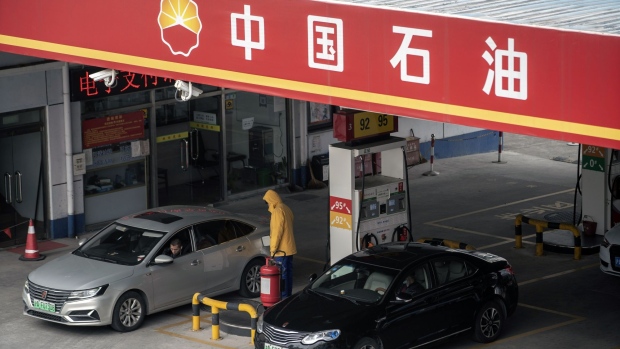 Vehicles refuel at a PetroChina Co. gas station in Shanghai, China, on Thursday, Jan. 7, 2021. China's energy markets are tightening as the economy rebounds and freezing weather grips much of the northern hemisphere, a dynamic that’s likely to be exacerbated by reduced Saudi oil output. , Bloomberg

(Bloomberg) -- PetroChina Co., the country’s biggest oil and gas producer, is weighing a plan to carve out its marketing and trading business and seek a separate listing, people with knowledge of the matter said.

China National Petroleum Corp., the state-owned parent of PetroChina, has asked external consultants to provide proposals on the feasibility of such a plan, said the people who asked not to be identified as the information is confidential. A surge in oil prices earlier this year prompted the Beijing-based firm to consider monetizing the business, the people said.

Deliberations are at a preliminary stage and the state-run firm has not yet finalized any decision due to the complexity of the business structures, the people said. A representative for CNPC declined to comment, while PetroChina didn’t respond to requests for comment.

Shares of PetroChina rose 1.4% on Friday in Shanghai as of 10:21 a.m., their largest intraday increase in more than a week.

PetroChina has four main business divisions, including exploration and production; refining and chemicals; marketing; as well as natural gas and pipelines. The marketing segment’s revenue jumped 45% to 2.17 trillion yuan ($320 billion) in 2021 from a year ago, mainly due to the increase in the price and sales volume of refined oil, according to its latest English-language annual report. The segment also had an operating profit of 13.28 billion yuan last year.

It wasn’t clear whether the whole marketing business would be spun off or parts of it.

The marketing division comprises refined products, including overseas, as well as crude oil, natural gas and chemical products, according to the annual report. It also includes some non-oil sales in PetroChina’s gas stations throughout the country, the report said. The business employed more than 37,000 people.

Oil prices surged earlier in the year following Russia’s invasion of Ukraine, before paring gains. West Texas Intermediate futures trade at around $88 a barrel, down from $122 in June.

Beijing has considered several options to monetize the country’s two national oil champions’ businesses in the past but few have materialized. It picked at least three banks in 2019 to work on the formation of a national oil and gas pipeline company, people familiar with the situation told Bloomberg News at the time. China Petroleum & Chemical Corp., the world’s largest oil refiner, also known as Sinopec, previously considered a initial public offering of its retail business.