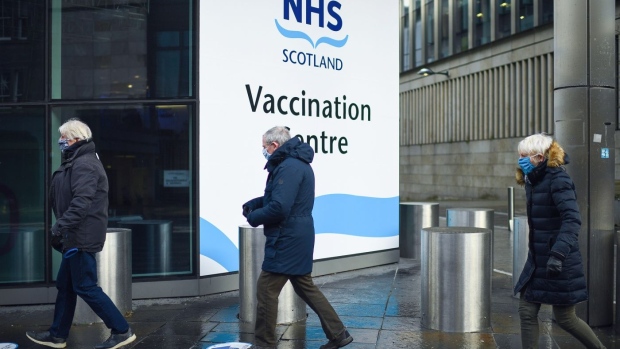 (Bloomberg) -- Vaccination reduced the risk of hospitalization from Covid-19 by more than 80%, according to findings in Scotland that add to the growing signs of effectiveness of immunization.

The shot developed by AstraZeneca Plc and the University of Oxford cut hospital admissions by 94% by the fourth week after a single dose, with the one from Pfizer Inc. and BioNTech SE leading to an 85% reduction, according to study results published Monday.

The data add to a growing body of evidence that inoculations are having a significant effect in countries with the most advanced campaigns. The Pfizer vaccine also appeared to stop the vast majority of recipients in Israel from becoming infected, according to a draft publication confirmed by a person familiar with the work.

Researchers in Scotland compared outcomes for patients who had received a first shot with results for those who had not. Among those ages 80 and over, one of the highest-risk groups, vaccination was associated with an 81% reduction in hospitalization across both vaccines.

The results should further ease concerns about the U.K.’s decision to delay second doses of the two-shot Pfizer and AstraZeneca vaccines in an effort to speed up protection for more of the population.

So far, some 17.5 million people have had a first dose, about a third of all adults in the U.K. The country also has Europe’s highest death toll from the virus, at more than 120,000, but hospitalizations have fallen by more than half from a January peak.