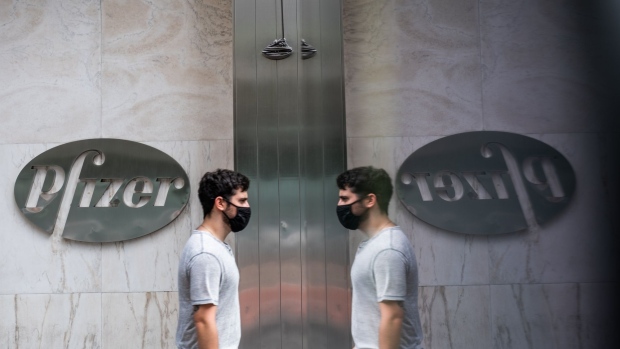 A pedestrian wearing a protective mask passing in front of Pfizer Inc. signage is reflected outside the company's headquarters in New York, U.S., on Wednesday, July 22, 2020. U.S. health officials agreed pay $1.95 billion for 100 million doses of a vaccine made by Pfizer Inc. and BioNTech SE, the latest step in an effort to fight the coronavirus pandemic. , Bloomberg

Pfizer Inc. and BioNTech SE reached a preliminary agreement to supply 200 million doses of their experimental COVID-19 vaccine to the European Union -- the biggest initial order yet for the U.S.-German partners.

The European Commission has concluded exploratory talks and will now begin contract negotiations, according to a statement Wednesday. The deal would include an option for another 100 million doses.

The EU didn’t disclose financial terms. Pfizer and BioNTech previously agreed to supply 120 million doses to Japan. The U.S. in July reached a deal to pay US$2 billion for an initial 100 million doses, with an option for 500 million more.

The companies have said they’re on track for regulatory review as soon as October. They’ve enrolled more than 28,000 of the 30,000 participants needed for a massive clinical trial to show the vaccine works and secured sign-off this week from regulators to expand the study to Germany.

Including study sites in Europe, “and now especially in Germany, is aimed at supporting an approval in Europe,” BioNTech Chief Executive Officer Ugur Sahin said in a previous statement.

The companies’ vaccine relies on a new technology that prompts the body’s own cells to produce the virus proteins needed to trigger the immune system.