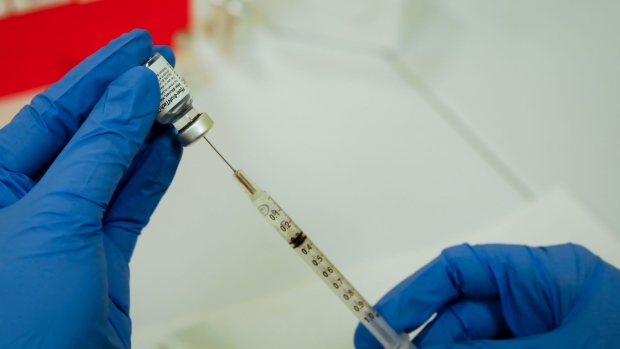 A healthcare worker prepares a dose of the Pfizer-BioNTech Covid-19 vaccine at the Key Biscayne Community Center in Key Biscayne, Florida, U.S., on Tuesday, Aug. 24, 2021. The Covid-19 vaccine made by Pfizer Inc. and BioNTech SE was granted a full approval by U.S. regulators, a milestone expected to help bolster the immunization drive amid a renewed surge in infections. , Bloomberg

(Bloomberg) -- Pfizer Inc. and BioNTech SE said their Covid vaccine was highly effective and prompted a strong immune response in children under age 5, based on early results from a trial that is likely to pave the way for infants and toddlers to finally get immunized.

A three-dose regimen was 80.3% effective in a preliminary finding based on 10 infections in children ages 6 months through 4 years old, the vaccine partners said in a statement on Monday. A formal analysis will be done once 21 children are infected, as the study was designed, and the final efficacy data will be shared when available, they said.

While still early, the initial findings are likely to be welcome news to parents and health officials who are anxious to protect the youngest children as mitigation measures fall to the wayside in many areas, despite rising numbers of infections. The lack of a vaccine for infants, toddlers and preschoolers almost 18 months after the shots first became available for adults has created a conundrum for many families, as older children go back to in-person school and much of life has returned to normal.

Pfizer and BioNTech expect to submit the necessary data to U.S. regulators this week to secure an emergency-use authorization for young children, after starting the process in February. They will ask other regulators around the world for clearance in the coming weeks, they said.

In the clinical trial, 1,678 children were given three shots of a 3 microgram dose of the vaccine, one-tenth the amount given to adults. They developed a strong immune response following the third dose, which was administered at least two months after the second shot, the companies said. The vaccine was well tolerated, with a safety profile similar to that of the placebo. Most side effects were mild or moderate.

The vaccine efficacy was determined by comparing the number of Covid cases among those who received the active immunization to those who got the placebo. Researchers determined it was 80.3% effective based on an analysis of 10 symptomatic Covid cases identified at least seven days after the third dose was given.

“We look forward to soon completing our submissions to regulators globally with the hope of making this vaccine available to younger children as quickly as possible, subject to regulatory authorization,” he said in the statement.

Much to the frustration of parents, Pfizer and BioNTech’s pediatric trial has faced months of delays. The companies initially studied a two-dose regimen in children under 5 that wasn’t clearly effective against the highly-transmissible omicron variant. At the request of US regulators, they moved to study three shots instead, extending the amount of time it took to complete the trial.

In an analysis of select participants, the three-shot regimen prompted an immune response in children aged 6 months through 4 years after one month that was about as strong as two doses in those 16-to-24-years old, the companies said.

Meanwhile, Moderna Inc. has said that a two-dose regimen of its vaccine in kids aged 6 months to 5 years was modestly effective without any serious safety concerns. It didn’t pass the 50% efficacy threshold regulators have typically looked for in approving Covid vaccines.

The US Food and Drug Administration is expected to convene advisory committee meetings in June to discuss the risks and benefits of both the Pfizer-BioNTech and Moderna vaccines in the youngest children, and provide a recommendation as to whether or not they should be cleared for emergency use.