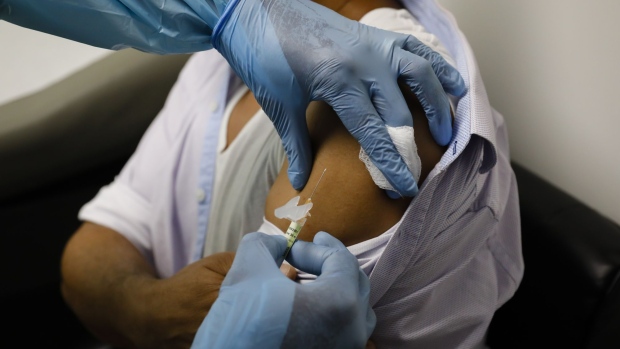 A health worker injects a person during clinical trials for a Covid-19 vaccine at Research Centers of America in Hollywood, Florida on Sept. 9. , Bloomberg

Researchers monitoring Pfizer Inc.’s giant trial of an experimental COVID-19 vaccine have reported no safety problems even after more than 12,000 people received their second of two doses.

“So far there has been no safety signal reported,” said Mikael Dolsten, Pfizer’s chief scientific officer, in an online meeting with investors. The trial, now targeted at enrolling 44,000 people, has reached its initial goal of 30,000 subjects, Pfizer executives said. The drugmakers have expanded the trial to to allow inclusion of teenagers and people with certain medical conditions, like HIV.

The trial compares two shots of the vaccine Pfizer is co-developing with Germany’s BioNTech SE to two doses of a placebo. While the doctors and subjects in the trial don’t know who got the vaccine -- a measure to avoid bias -- a committee of outside experts that knows which people received the shot is reviewing safety data on a weekly basis, Pfizer executives said during the investor meeting.

“They would notify us if they had any safety concerns and have not done that to date,” Kathrin Jansen, Pfizer’s head of vaccine research, said during the meeting. The company’s own scientists are also looking for worrisome adverse events that haven’t appeared so far. Fatigue has been the most common side effect seen in the trial thus far, according to the Pfizer presentation.

Pfizer confirmed it expects to get conclusive data on the vaccine’s efficacy by the end of October. The board monitoring the trial will conduct its first review of the data for efficacy when a total of 32 coronavirus cases have been seen among participants, Pfizer executives said during the investor meeting.

The company promised to make all its safety and efficacy data publicly available should it seek emergency authorization for the vaccine.

“What we are doing in terms of releasing data is very unusual,” Chief Executive Officer Albert Bourla said on a call with the press, citing ongoing conversations with U.S. regulators and Congress. “It is a must to release this data.”

The safety of experimental shots has been a paramount concern since AstraZeneca Plc paused tests of the vaccine its co-developing with the University of Oxford following an adverse event in a U.K. subject. AstraZeneca Chief Executive Officer Pascal Soriot has said that it isn’t clear whether the participant had a condition called transverse myelitis, a suspected diagnosis, and an independent safety board was reviewing whether the participant’s illness had been caused by the vaccine or was unrelated. AstraZeneca’s UK trial has resumed, but its big U.S. trial remains on hold.

If a preliminary analysis of Pfizer and BioNTech’s vaccine data shows it’s effective, the companies could approach the Food and Drug Administration seeking emergency authorization. Bourla said the timing of such an authorization remains unclear.

The trial is designed to continue gathering safety and efficacy data even if an authorization was granted, Pfizer’s Jansen said on the press call. An emergency authorization would likely be for a very small subset of the population, and most people wouldn’t have access to the vaccine outside of the trial. That would allow the companies to continue gathering detailed results in different groups, she said.

Should Pfizer receive an emergency authorization, its top executives have given assurance that distribution will kick off immediately. The New York-based company has sufficient freezers and thermal shippers to be able to preserve the shot, which contains messenger RNA, a type of molecule that typically requires ultra-low temperatures for longterm storage.

Angela Hwang, Pfizer’s president of biopharmaceuticals, said that there are currently three options for distribution of its vaccine: With Pfizer’s freezers, vaccine providers can extend the shelf-life of the shot by 6 months; with thermal shippers and dry ice, they can keep the vaccine for 15 days; and with a typical refrigerator, the vaccine can last for 5 days. These different options “provide a wide range of flexibility,” Hwang said.

But Pfizer’s researchers are already looking for ways to create an improved version of the vaccine that would allow for storage at higher temperatures and for longer periods, which would ease distribution. The company is also exploring a new formulation that could be implemented in a single dose.