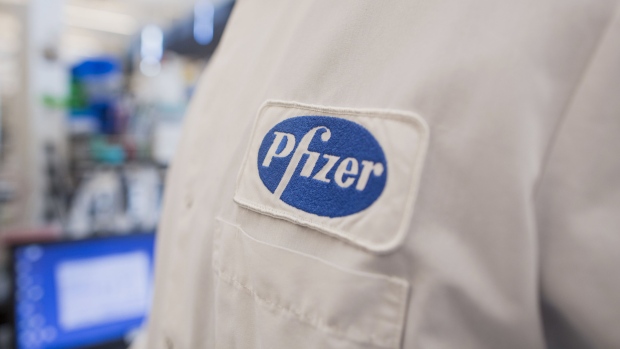 The Pfizer Inc. logo is seen on the lab coat of an employee at the company's research and development facility in Cambridge, Massachusetts, Oct. 26, 2015. Bloomberg/Scott Eisen

Pfizer Inc. says its future looks good, but investors are registering their concern about the present.

Shares of the New York drugmaker declined Tuesday by the most since July 30, the day after the company unveiled a deal that would reshape the storied pharmaceutical giant into two very different freestanding enterprises — one a nimble innovator of therapies for cancer and rare diseases, the other a cash-generating seller of some of the world’s most-widely prescribed medicines.

Under the envisioned split, Pfizer will become a research-focused drug company. A unit that sells older drugs under the Upjohn brand is expected to combine with generic-drug giant Mylan NV and be rechristened Viatris. Pfizer expects to complete the overhaul by the middle of this year.

In the meantime, the drugmaker is navigating a challenging strait. Its fourth-quarter sales and profits declined, as some of the products that will be hived off and merged with Mylan saw weaker demand amid increasing competition. Sales of pain drug Lyrica, which lost U.S. sales exclusivity in July, dropped 67 per cent, a major factor in the company’s nine per cent overall sales decline.

And while the businesses that will make up the streamlined Pfizer, including treatments for cancer, immune-system disorders and rare diseases, fared well in the quarter, with sales increasing seven per cent, there were signs of strain. Top-selling breast-cancer drug Ibrance drove much of the unit’s growth, but still fell short of Wall Street’s sales expectations. Sales of rheumatoid arthritis treatment Xeljanz also fell short of estimates.

“We’re at an inflection point,” Chief Executive Officer Albert Bourla said in an interview Tuesday. Pfizer will use its capital to add to its biopharma pipeline and facilities in the first half of the year as it separates Upjohn, he said.

Pfizer shares declined as much as 5.3 per cent in Tuesday trading. So far this year, the stock has retreated 2.4 per cent, after falling 10 per cent in 2019.

In addition to the planned deal with Mylan, Pfizer has also split off its consumer-health products business into a joint venture with GlaxoSmithKline Plc, which reduced overall revenue for the quarter.

The company reported a fourth-quarter net loss of US$337 million, compared with a US$394-million loss a year prior. Adjusted earnings were 55 cents US, Pfizer said in a statement, missing the 57-cent-US average of analyst estimates compiled by Bloomberg.

Faced with mounting pricing pressures to generic medicines in the U.S., the merged Mylan and Upjohn is staking its future on emerging markets like China, which is in the middle of an outbreak of a new coronavirus while it overhauls much of its health system.

Bourla said the company’s manufacturing operations in the region hadn’t to-date been impacted by the outbreak.

“My first concern is for the thousands of employees we have in China. We’re keeping an eye on them,” he said. Pfizer is working with the Chinese government and proactively building anti-infective inventories, Bourla added.

Upjohn’s fourth-quarter sales in China declined one per cent on an operating basis, primarily driven by pricing pressure on brands like Lipitor and Norvasc in provinces that are implementing a new drug-buying program with a bidding process to push down costs. Upjohn’s China sales for the full year were up seven per cent, Pfizer said.

“There have been increasing jitters around growth prospects in key ex-U.S. markets, particularly China where that country’s expanded volume-based procurement initiative has had a substantial impact on certain products in certain provinces,” said Raymond James analyst Elliot Wilbur, assuring investors those concerns aren’t warrented based on fourth-quarter results.