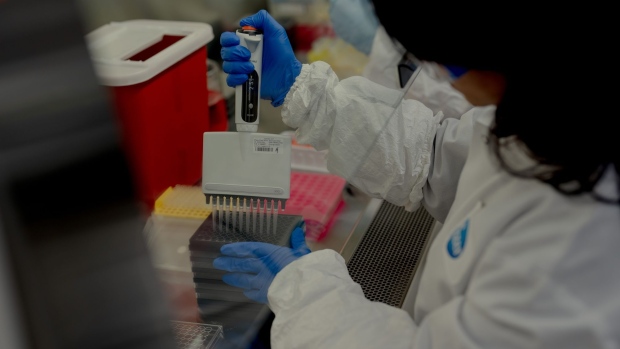 (Bloomberg) -- Pfizer Inc. will spend $470 million to expand its vaccine research facilities 25 miles northwest of New York City, where the company hopes to maintain its edge in the booming field of messenger RNA, the technology behind its blockbuster Covid-19 shot.

The drugmaker will construct a new building and renovate existing facilities on its campus in Pearl River, New York, which has been the nexus of laboratory research driving its vaccine programs, including the one for Covid in partnership with BioNTech SE.

Discussions about expanding Pearl River began before the pandemic, and Pfizer’s Covid research put more strain on its facilities. Scientists there were responsible for designing the shot, testing it on animals and conducting other quality checks and analysis. They’ve also done  research and development work on vaccines including Pfizer’s Prevnar for potentially lethal pneumococcus,  the world’s best-selling vaccine until the Covid shot arrived.

“We’ve been in a constant situation of running out of space,” said Steve Bjornson, vice president and chief operating officer of vaccine research and development, in an interview. “We’re trying to keep up with the portfolio and enable the expansion of mRNA capacity.”

The Covid vaccine, Comirnaty, has almost doubled Pfizer’s annual revenue, bringing more than $36 billion in 2021 sales alone. Pfizer is aiming to replicate that success by applying mRNA to other disease areas. Expanding Pearl River will bring additional lab space to develop a new portfolio of mRNA vaccines hoped to prevent influenza and other viral pathogens, Bjornson said. It will also benefit existing projects, such as Pfizer’s experimental vaccine against respiratory syncytial virus, which uses a more traditional technology.

Pfizer’s board signed off on the 260,000-square-foot expansion — including 55,000 square feet of lab space — at the end of June. The drug giant, which is headquartered in Manhattan, aims to complete the Pearl River construction in the first quarter of 2026.

“This is a critical time for vaccine science, and we’re at the center of it and we want to stay there,” Bjornson said. “When anyone thinks of Pfizer, I hope they think of vaccines–and that we are, in effect, the best and most advanced mRNA player in the world.”

Straddling farmland and forest, the Pearl River campus currently hosts more than 1,000 Pfizer employees, hundreds of whom worked on the Covid-19 vaccine. On-site labs currently have capacity for 220 staff, and the expansion will create space for 150 more.

Bjornson said he hopes the state-of-the-art facilities will give Pfizer an edge in an increasingly competitive battle for scientists with expertise in mRNA vaccines.  The company considered building new facilities in other biotechnology hubs, like Cambridge and San Francisco, but ultimately decided Pearl River's proximity to New York City, the Hudson Valley, Connecticut and New Jersey was preferable.

“You have access to a wide variety of lifestyles,” he said.

Pfizer recently made a separate $29 million investment to establish a lab in Pearl River that’s used to study potentially dangerous infectious agents like Covid. The lab, commissioned in December 2020, has a biosafety level 3 rating, qualifying it to study infectious agents or toxins that may be transmitted through the air and cause lethal infections. The drugmaker is now committing another $20 million to double the capacity of the lab.