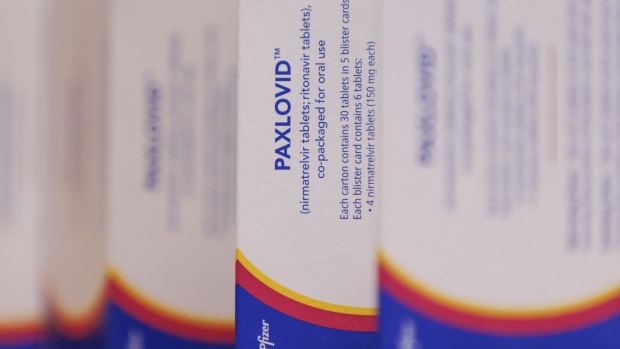 (Bloomberg) -- Pfizer Inc. is resisting requests for study supplies of its Covid-19 pill, Paxlovid, disappointing researchers who say combining the $22 billion therapy with other drugs might stave off resistance.

Pfizer hasn’t started any combination trials in people, and a review of the clinicaltrials.gov database shows no outpatient studies combining Paxlovid, the mainstay US Covid therapy, with other antiviral drugs or antibodies. Some academic researchers and advocacy groups say they can’t get Paxlovid for human studies that could maintain or improve its effectiveness and expand use.

Pfizer scientists have said one of their goals in developing Covid treatments has been minimizing the chances of resistance, which occurs when viruses mutate to overcome a drug’s effects. While there are no signs of Paxlovid encountering resistance so far, it’s a constant threat to antivirals of all kinds, including treatments for HIV and hepatitis C. Covid’s frequent mutations have already rendered several monoclonal therapies useless and have begun evading powerful mRNA vaccines, including the one made by Pfizer and partner BioNTech SE.

Pfizer is considering combinations, but no such studies are currently underway, according to a spokesperson.

The appearance of resistance to Paxlovid “is likely just a matter of time,” according to Derek Lowe, a medicinal chemist and industry blogger who said he’s surprised that combination trials aren’t already underway with Paxlovid. “From where I stand it looks like a natural thing to try.”

Pfizer’s apparent reluctance to share its antiviral with collaborators has been “disturbing,” said Reshma Ramachandran, a postdoctoral fellow in Yale University’s National Clinician Scholars Program who studies transparency in drug company trials. “It’s all very puzzling,” she said. “It really makes me wonder what’s going on.”

Efforts to study combinations have been slowed by the extra red tape around emergency use authorizations, according to Carl Dieffenbach, leader of the Biden administration’s multi-billion-dollar effort to develop antivirals for Covid and future pandemic threats.

“The company has to approve of how the drug is being used,” he said. “And a lot of companies aren’t necessarily keen on having their agent combined with others.”

RNA viruses like SARS-CoV-2 constantly mutate, raising the possibility strains will emerge that can overcome the effects of single drugs. HIV, another RNA virus, became consistently resistant to treatment until the introduction of combinations in the 1990s.

Resistance to Paxlovid “is easy to generate in the lab,” said Columbia University virologist David Ho. In unpublished work, his group has generated multiple coronavirus strains, with different sets of mutations, that grow in the presence of the Paxlovid “even at higher and higher concentrations,” Ho said in an email.

Paxlovid’s short treatment duration and high concentrations suggest the chances of resistance are minimized, a Pfizer spokesperson said. The company is monitoring mutations in patients and the laboratory, and will use the findings to design second-generation drugs, according to the spokesperson.

But scientists outside the company say combinations are an important part of the path forward. Putting multiple drugs together “is like hitting the virus factory at two different points in the assembly line,” says Stephen Polyak, a virologist at the University of Washington in Seattle. That can help keep resistance from arising.

Paxlovid is a blockbuster for Pfizer; the company recently said it has commitments worth $22 billion in sales for this year alone. While combination studies may make sense at some point, the company isn’t “right now in a hurry to do something like that,” Chief Executive Officer Albert Bourla said May 3 in an interview.

Instead, the drugmaker is focused on reducing the bitter-tasting regimen from six daily pills over five days and curbing interactions with dozens of other common medicines that complicate Paxlovid’s use.

Drugs for Neglected Diseases Initiative, a nonprofit research organization, says that Pfizer in January turned down a request to provide Paxlovid for studies in combination with an inhaled steroid in a trial in Africa. The goal was to develop a new regimen that could be started more than five days after symptoms develop, the current maximum, allowing more people in poor countries who live far from doctors to get it.

The answer to a request for Paxlovid was “a categorical no,” DNDi North American regional director Rachel Cohen said. Pfizer was planning a similar study on its own, the group was told.

“I don’t know why it’s been so difficult for them to at the very least provide some study drug,” said Cohen. Reluctance to share the drug is “definitely slowing down an increased knowledge of how to optimally use antivirals.”

Pfizer said that additional studies of Paxlovid are underway and being explored and the company we will continue to share information. Pfizer said it’s using “resources in a way that maximizes availability of our overall supply, to help ensure access to patients as quickly as possible.”

Then, in late March, a Pfizer executive emailed the European researchers asking for feedback on a company study of Paxlovid, said a scientist at the school. It was almost exactly the same design as the one the university had proposed in December, the scientist said. If Pfizer had agreed to the study in December, it would be finished today, said the researcher, who asked not to be named discussing information that isn’t public.

Pfizer said it’s planning to study the drug in immunocompromised people in the second half of the year.

Another possibility would be to combine Pfizer’s Paxlovid with molnupiravir, the Covid treatment from Merck & Co. and Ridgeback Biotherapeutics. Merck and Pfizer had preliminary conversations last year about the combination, Nicholas Kartsonis, a Merck senior vice president, said in October. At the time, he emphasized that lab studies would have to be completed before any human trials to rule out unwanted interactions.

Merck didn’t respond to a request for comment on whether conversations had progressed, although a spokesperson said the company was still open to combination trials. Pfizer declined to comment.

One group that would likely benefit from drug combos right away are patients with weak immune systems and limited ability to eliminate the virus, infectious disease researchers say.

“It’s kind of an essential experiment for such patients who are severely immunocompromised,” said Myron Cohen, director of the Institute for Global Health and Infectious Diseases at the University of North Carolina Chapel Hill. He wants to test Paxlovid with Eli Lilly & Co.’s bebtelovimab antibody in immunocompromised people, but hasn’t yet asked Pfizer for the drug.

Whether combination therapy might help prevent viral relapses that are being reported in some patients after Paxlovid treatment is an unknown, as the causes of the rebounds are unclear. In a statement, Pfizer said rebound occurred in 2% of patients who got the drug in a trial, compared to 1.5% of patients on a placebo.

“This suggests the observed increase in viral load is both uncommon and not uniquely associated with treatment,” a Pfizer spokesperson said.

Developing combination therapies is “most definitely” an important goal over the long term, said Columbia University’s Ho, who’s renowned for his work in developing HIV combination therapy. Ho experienced Covid rebound himself when his symptoms returned after taking Paxlovid.

Paxlovid is itself a combination of two drugs, although they’re not both aimed directly at the virus. Its main active ingredient, nirmatrelvir, is paired with another medication that boosts and lengthens its activity in the body. That drug, called ritonavir, comes with significant drug interactions, including with common cholesterol and asthma medicines.

Later this year, Pfizer plans to test a next-generation Paxlovid-style compound that eliminates the need for ritonavir. Removing the booster could make it easier to study other combinations.

“Unfortunately what is going to happen is the combinations will start as soon as we start seeing resistance,” predicts Sara Cherry, a professor of pathology and laboratory medicine at the University of Pennsylvania who’s studying Covid drug cocktails in her lab.