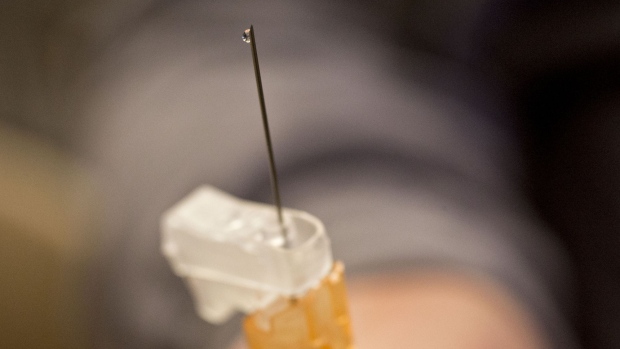 Liquid vaccine flows from a flu shot a hospital. , Bloomberg

(Bloomberg) -- Pfizer Inc. is preparing for the novel coronavirus to endure, leading to long-term demand for a seasonal shot to protect against Covid-19.

The New York pharmaceutical giant and its German partner BioNTech SE are front-runners in the race to develop a Covid-19 vaccine, employing a technology known as messenger RNA that can quickly advance through clinical studies. The companies dosed their first U.S. patient in a late-stage trial Monday, and they could be ready to seek approval from regulators as early as October.

There has been a growing sense that a one-time vaccine regimen may not be enough to ward off Covid-19 forever. It isn’t clear how long coronavirus antibodies can protect people from the disease, and early trials haven’t yet yielded proof that a shot could prevent infection for an extended period of time.

Pfizer said it expects that a Covid-19 vaccine could, like the flu shot, be an inoculation that is needed regularly to be effective.

The drugmaker expects to bring the vaccine to market in two phases. The first is a so-called pandemic phase, which Pfizer expects to last through 2020 or into 2021, Bourla said. During that period, Pfizer will aim to deliver a safe, effective and affordable vaccine for governments around the world.

Last week, the U.S. government agreed to a $1.95 billion deal to buy 100 million doses of the Pfizer-BioNTech vaccine if it is approved by regulators. That deal suggests a price of $19.50 a dose, or $39 for a two-dose regimen, though the government will make it free to the public.

“This is not the normal business model,” Bourla said. He said Pfizer is providing governments with the drug for far lower than it would normally cost, given the effect the pandemic is having on the world.

If the new coronavirus establishes itself as a persistent challenge, Chief Scientific Officer Mikael Dolsten said Pfizer would trigger a second phase where annual or bi-annual immunizations would be needed for the foreseeable future.

Bourla said if Covid-19 becomes a recurring foe akin to influenza, it would fundamentally change the business model behind the shot.

“I can see that this would be a normal vaccination like the flu,” he said, adding Pfizer would revise the price of its vaccine based on the value it provides to the health-care system. “If this disease is not so intense, the value will be lower than it is today, right? If there is a lot of competition, that will also affect price. $19.50 is a very, very low price for the value of the product right now,” he said.

Other drugmakers have adopted a similar strategy in deciding how much to charge for drugs aimed at stanching the pandemic.

Gilead Sciences Inc. donated its supply of the antiviral remdesivir, the first therapy approved by the U.S. Food and Drug Administration specifically for treating Covid-19, to the government through the end of June. It then priced the therapy at $3,120 for a typical course for patients on commercial insurance and Medicare.

That price was significantly higher than some consumer advocates had hoped Gilead would charge, but within a range that some health advocates said would be acceptable for a drug with its benefits. The price will allow Gilead to make a substantial profit from remdesivir if significant quantities of the drug continue to be needed.

Though Pfizer’s Dolsten said there’s a “very large opportunity” for its mRNA vaccine in the years to come, first the company needs to see the late-stage data.

Pfizer anticipates it will be able to enroll the majority of its 30,000-person late-stage trial before the end of August, according to Bourla. “At the end of September it’s very likely we’ll have enough events to say if the product works, he said. “This is when we can say we have an effective vaccine and only then.”

Bourla said he’s hoping there will not be a subsequent pandemic wave. “I hope that us and many others will come up with effective vaccines,” he said.

Pfizer is also working on treatments. Dolsten, the top scientist, said the company has been evaluating protease inhibitors that target a crucial enzyme to interrupt the viral life cycle in an infected patient. Such drugs are widely used to treat HIV and AIDS.

“In less than two weeks we plan to file for approval to start a trial in late August, which is actually ahead of our original timeline,” Dolsten said. “This would be the first SARS-COV-2-specific protease inhibitor to the best of our understanding, and it will be started in infusing Covid patients alone and with other antivirals.”

Dolsten said these studies could potentially lead to a regulatory filing before the end of next year, pending promising clinical data.

“It’s a very aggressive plan,” he said, “but it’s feasible given the urgent need for patients.”