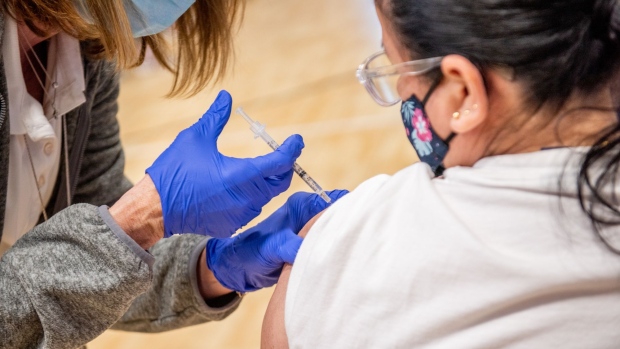 A healthcare worker administers a Covid-19 vaccine at a vaccination site at a church in Long Beach, New York, on Thursday, May 13, 2021. As the U.S. launches a campaign to vaccinate teens against Covid-19, public-health officials are leaping into action on a new strategy designed to involve family doctors, pediatricians and schools. Photographer: Emily Elconin/Bloomberg , Bloomberg

(Bloomberg) -- Pfizer Inc.’s chief executive said the company has asked the U.S. to allow Covid-19 booster shots for people age 16-17, a move that would expand access to additional doses amid worry about the new omicron virus variant.

Albert Bourla said in a tweet Tuesday that the company asked the Food and Drug Administration for emergency authorization of third doses for the age group. Shares of the drugmaker, which rose 2.5% in regular trading, gained 0.7% after hours in New York.

Currently, people age 5 and older in the U.S. are eligible to receive the messenger RNA vaccine, which Pfizer developed with partner BioNTech SE, but boosters have so far only been cleared for adults.

“It is our hope to provide strong protection for as many people as possible, particularly in light of the new variant,” Bourla said.

The emergence of the omicron strain led U.S. regulators to recommend on Monday that all vaccine recipients 18 and older get a booster six months after receiving a second dose of a messenger RNA vaccine. People who’ve received the Johnson & Johnson shot can get a booster after two months.

Some researchers have previously expressed concern that younger people, especially young men, could be prone to myocarditis, a heart-related side effect, from additional doses of messenger RNA vaccines. However, Pfizer’s shot has been found to be safe and highly effective in clinical trials.