Western politicians have faulted China for initial delays in providing information as the coronavirus spread around the world. Now as Beijing develops a vaccine, the need for transparency is proving essential to win back trust.

American drugmaker Pfizer Inc. and German biotechnology firm BioNTech SE announced this week that its vaccine appears more than 90 per cent effective in stopping COVID-19 infections. The preliminary finding spurred a global stock rally and put the companies at the head of the pack in the race for the vaccine.

At around the same time, China saw the final-stage trial of one of its top vaccine candidates halted in Brazil due to a serious adverse event. While Brazil reversed its decision in less than 48 hours, the episode underscored the fraught geopolitical tensions around vaccine development: Last month President Jair Bolsonaro said China lacks credibility and people wouldn’t feel safe with the shot “due to its origin.”

“As China continues to push its own vaccines through the final stage of clinical trial in the midst of Pfizer’s announcement, the need for Beijing to address public perception about its vaccine safety issues is more pressing now than ever,” said Xiaoqing Lu Boynton, a consultant at Albright Stonebridge Group who focuses on health care and life sciences.

For China, the stakes in developing a successful vaccine are high after a year that saw the outbreak in Wuhan further roil relations with the U.S., Europe, India and Australia. While Beijing quickly got the virus under control and sought to distribute aid to other countries, complaints followed about faulty materials and strings attached.

The race to develop a vaccine then became a way for China to both show the world its technological superiority as the Trump administration urges countries around the globe to avoid Chinese companies for 5G networks, computer chips and big infrastructure projects. Distributing it widely would also help China regain some lost soft power: President Xi Jinping has promised that vaccines developed by China will be a global “public good,” and he joined a World Health Organization-backed effort to inoculate everyone against COVID-19. 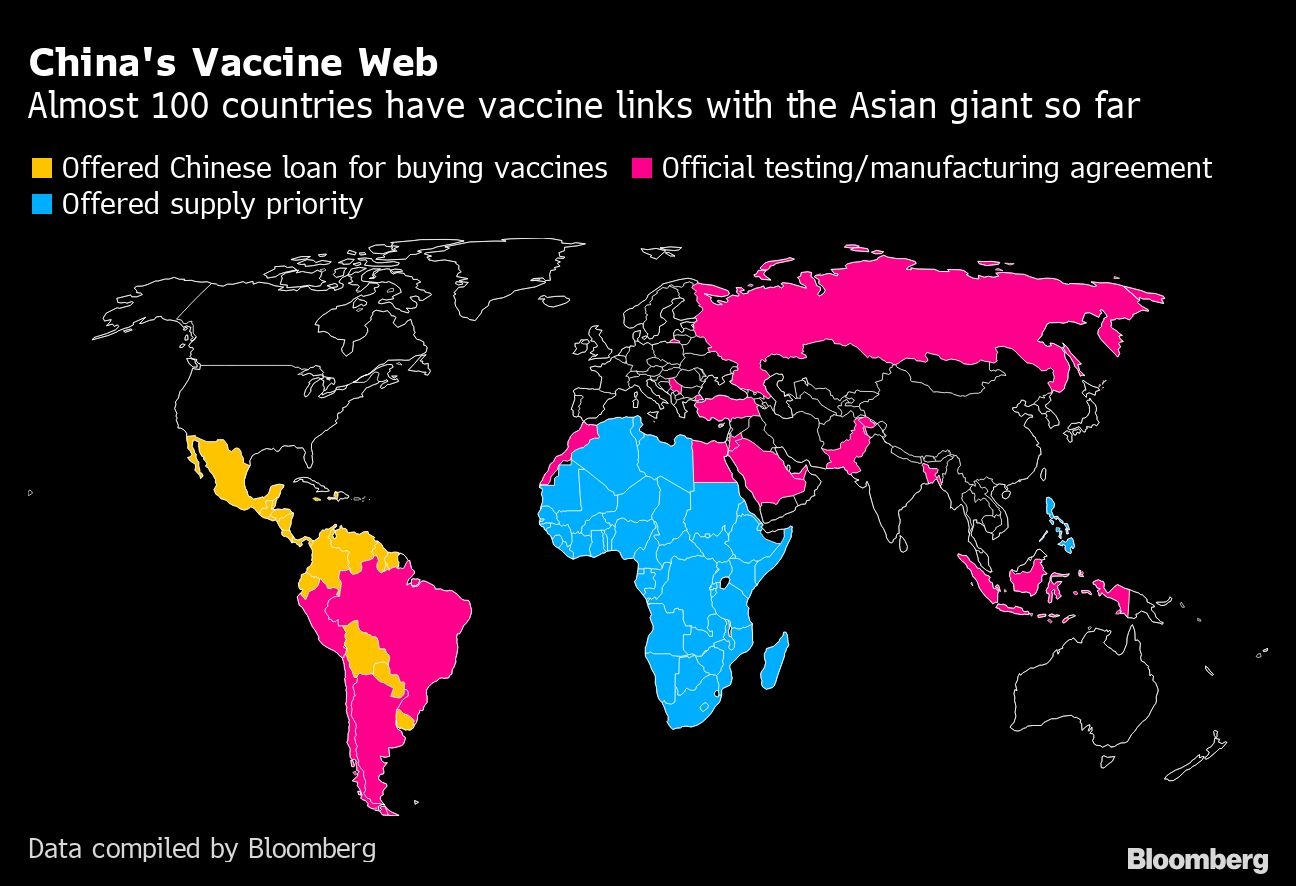 The “problem for me is global public good or China public good -- it’s two different notions,” said Nicolas Chapuis, the European Union’s ambassador to China. While he praised China’s decision to join the WHO-backed vaccine program, he said many questions remain on distribution, price and intenational certification.

“To be certified samples have to be given,” he said. “Samples have not been given.”

China has promised to prioritize providing doses for more than 60 countries, including governments that have received infrastructure loans under Xi’s Belt and Road Initiative. Indonesia, Bangladesh, Pakistan and Morocco have formal agreements with China’s major vaccine manufacturers, and countries in Latin America and the Caribbean have been promised a US$1 billion loan to purchase doses from them.

“The issue is the lack of transparency,” Ryu said. “So the right thing for the Chinese government to do is to make its trial results and related information public, so that experts can scrutinize them.”

China has already administered the vaccine, including the one from Sinovac Biotech Ltd. whose trial was just paused in Brazil, to hundreds of thousands of people under an expansive emergency use program. But none of the Chinese frontrunners have published any preliminary data from Phase 3 trials as Pfizer has done.

Chinese Foreign Ministry officials have hailed the progress of the country’s vaccines over the past week and said safety was of paramount importance. Vice Foreign Minister Luo Zhaohui said China was “at a rather front position in the world,” while spokesman Wang Wenbin said Thursday the country’s vaccine progress “has been commended by many countries.”

Chinese companies could still emerge as frontrunners in vaccine distribution: The inactivated vaccines would be easier to distribute in poorer countries than the double-shot from Pfizer, which requires costly deep-freeze production, storage and transportation networks. The setback in Brazil might actually reinforce the notion that China is serious about the safety of its vaccine, according to Yanzhong Huang, a senior fellow for global health at the Council on Foreign Relations.

“It’s still too early to say that the U.S. has won the race,” he said.

For the moment, however governments across Asia are getting in touch with Pfizer to secure the vaccine and learn from the company. The company’s results “have given hope” for many research programs that use similar technology, Nakorn Premsri, director of Thailand’s National Vaccine Institute, said in a briefing on Tuesday.

Even China is jumping on board. Its drug regulator accepted an application from domestic drugmaker Shanghai Fosun Pharmaceutical Group Co. to conduct a bridge trial that would pave the way for it to be approved in China. Fosun said it could spend tens of million yuan to build cold-chain logistics needed to store and supply the shot in China.

With vaccine nationalism set to rise, it’s all the more important for Chinese companies to publish all their data and have it subjected to peer review, said Nicholas Thomas, associate professor in public health at the City University of Hong Kong.

“If the world is going to trust a Chinese vaccine, then the information will have to be transparent,” he said.

Yet even then, it still may be hard to get China’s adversaries on board. In India, where vaccine distribution to more than a billion people will prove a challenge no matter where it comes from, public anger with China is the highest in recent memory following a deadly border standoff that has dragged on for months.

“Cooperation will be difficult given current levels of trust,” said Biren Nanda, a former Indian ambassador who spent a decade in China. “When not only India but even other nations can’t seem to trust China with their work on our telecom systems and electronics, it would be a tall order to expect trust in a Chinese vaccine.”